Posted on April 19, 2017
Whew, I am out of it getting our weekend recap up! We were all so wiped by Sunday evening, and then Monday was one of those days where I just felt happy to get to the end. By the time we got the kiddos to bed, I had zero motivation to pull out my laptop, and opted for watching a comedy special with Mike instead 🙂 I finally got my act together though, and got the details of our weekend pulled into a post!
When I got home from work Friday afternoon, I quickly threw together a batch of sugar cookies. I love making holiday themed cookies, and I just knew Jackson would appreciate some bunnies 🙂 Once Mike got home, we ran to get the boys from my parents. 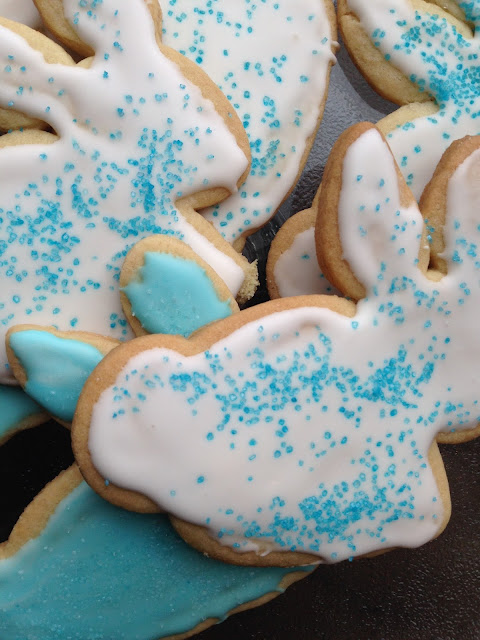 Our weekend kicked off on a sad note, with the loss of our childhood dog, Annabelle. While I am so sad that she is gone, the poor girl was just not in good health anymore and she had such a good day Friday, and then her death came on out of nowhere. She went from running and playing to gone in a few minutes, and I am so glad that she really didn’t seem to suffer at all. Those pets just tug at every last one of your heartstrings, even though they drive you crazy half of the time 😉 We spent our Friday night at my in-laws for a fish fry, as it was the last Friday of Lent! My father in law makes the BEST fried fish, and I always eat way more than I should. I got Lincoln into his jammies while we were there, and put him to bed right when we got home. I spent the rest of the night feeling pretty sad about Annabelle, but hung out on the couch with Mike for a bit before calling it a night. 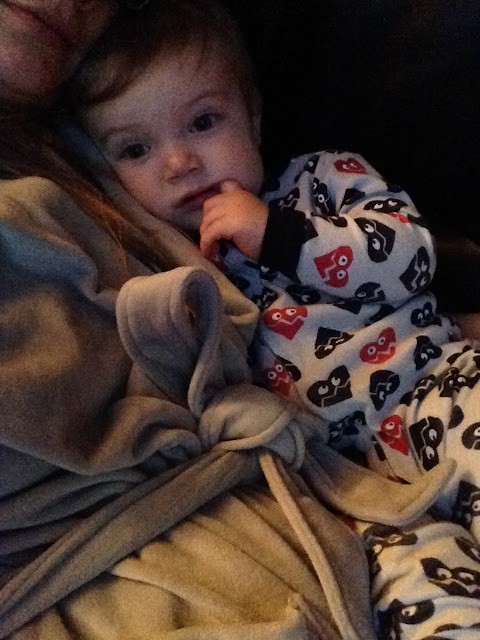 On Saturday, I ended up going down to the cities with my mom and sister to watch my brother’s fiancé try on some dresses! Of course I didn’t snap a single picture, but it was so fun to watch her try them on. She didn’t pick the one just yet, but she is going to be so gorgeous in whatever she wears. It was fun to spend some time with the girls and take a mommy vacation for the afternoon!
Once I got home, we were all pretty lazy. To be honest, I cannot even remember what we had for dinner Saturday night. I am racking my brain as I type this and I’m not coming up with anything. Clearly it was an eventful day, as evidenced by the photo below! 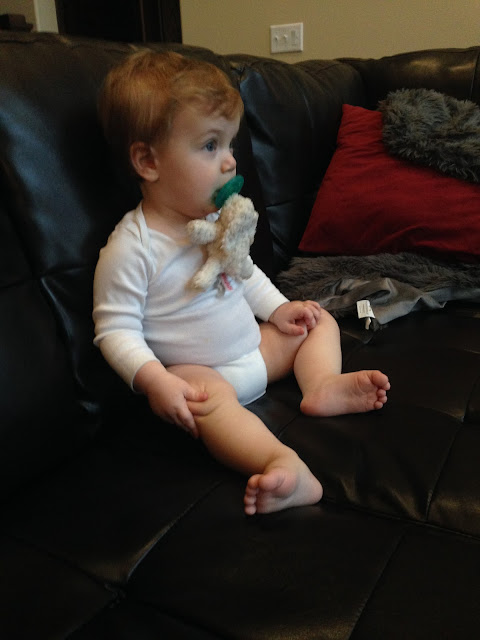 Lincoln did, however, get to enjoy his very own cookie when he woke up from nap. And he ate every last crumb! He is such a good eater, I have my fingers crossed it continues so we don’t have the battles another little boy in the house put us through.. 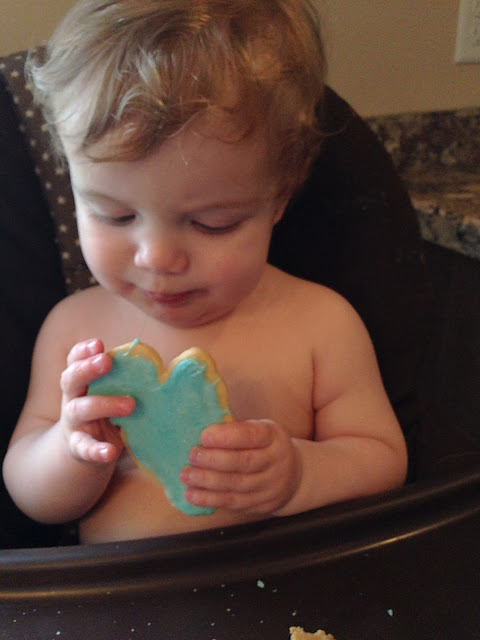 Once I put Lincoln to bed, I rallied last minute and decided I just had to live up to my mommy obligations and dye some Easter eggs. I didn’t end up doing the Cool Whip option I posted about last week, as I just didn’t have the time or energy. However, I did create our dye from scratch without having to buy a kit. It was actually SUPER easy and I felt good knowing I was in control of what I was exposing Jackson to! 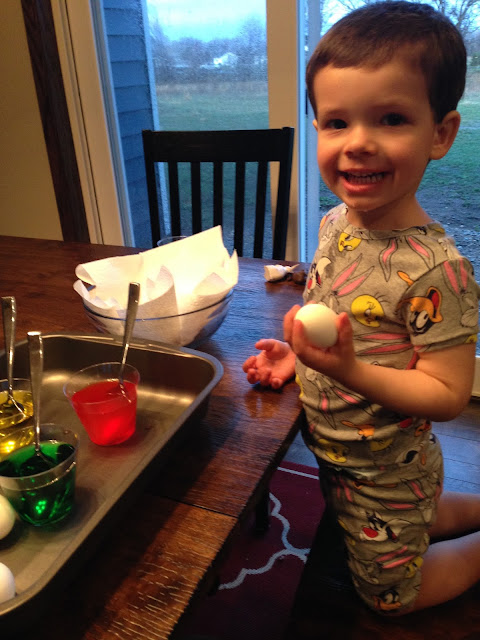 He was so excited to help dye the eggs! I am so amazed by the difference a year can make. Last year, while he helped, he really was not that into the whole process. But this year, he is so excited about everything, and acts like it is the best thing ever. My sweet boy. 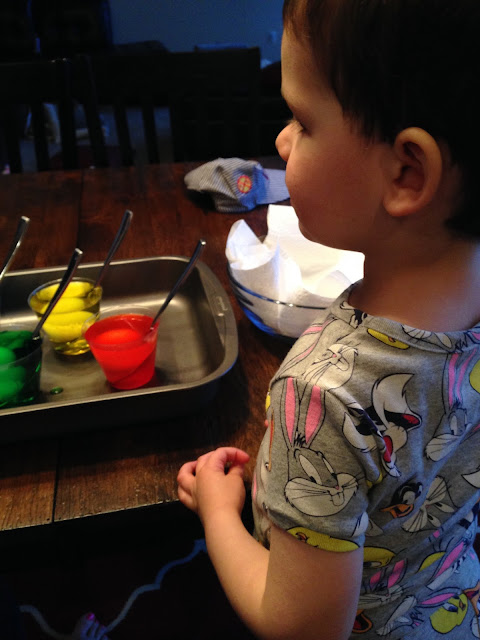 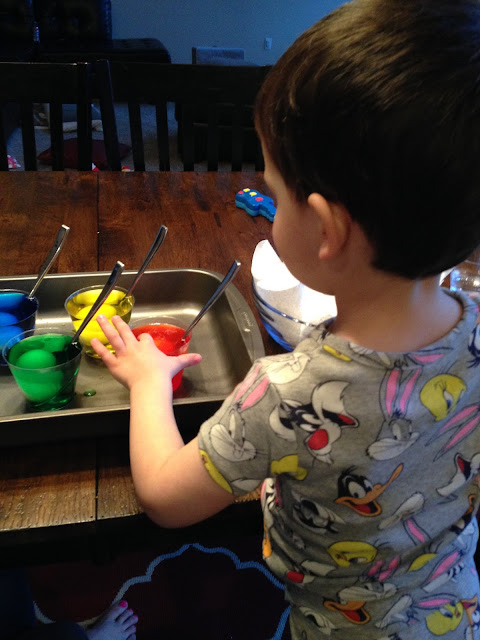 He was so excited to wait for the eggs to take up the color so he could put them in the bowl! 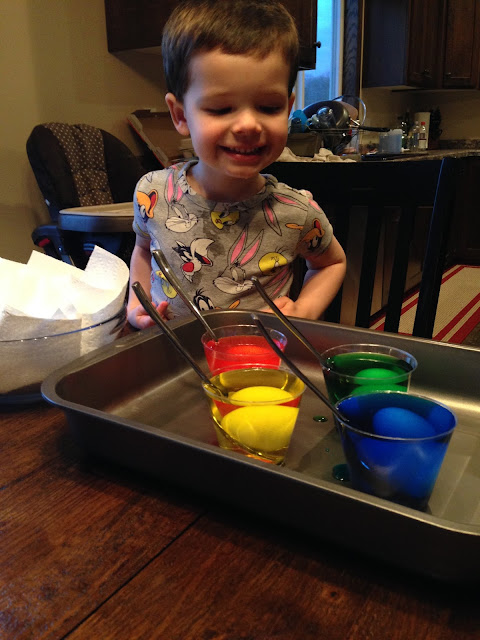 I was so pleasantly surprised by how our ‘homemade dye’ turned out. So pretty, and honestly just as easy as the kits! 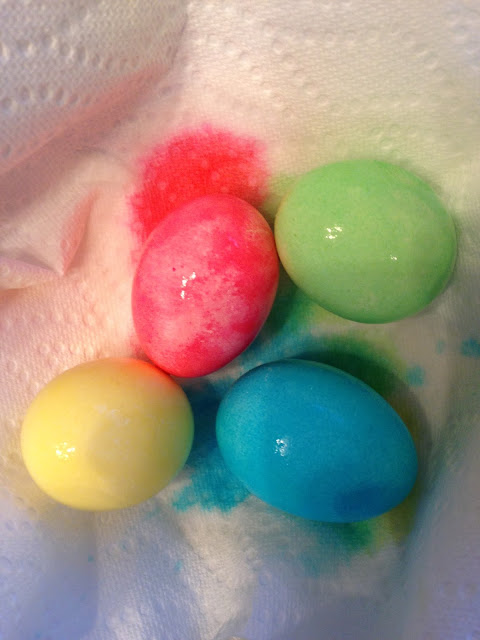 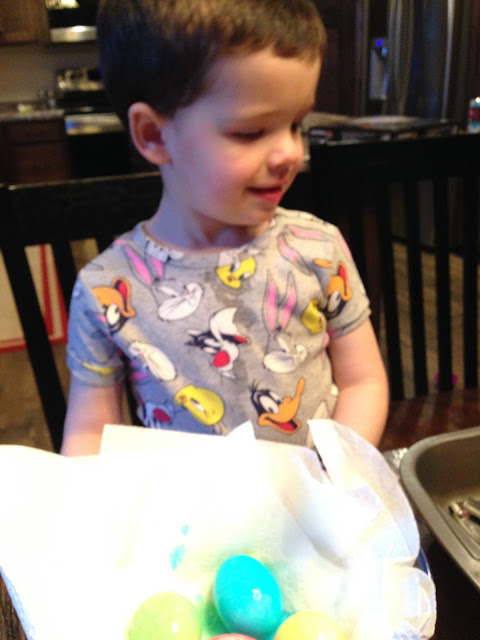 His whale needed some water during the egg dying process, apparently. 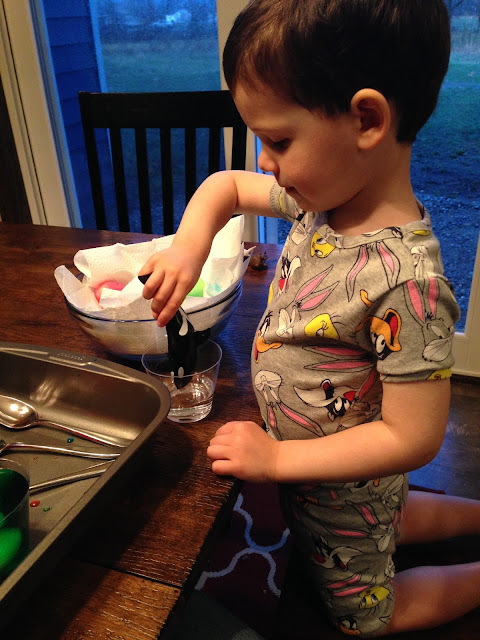 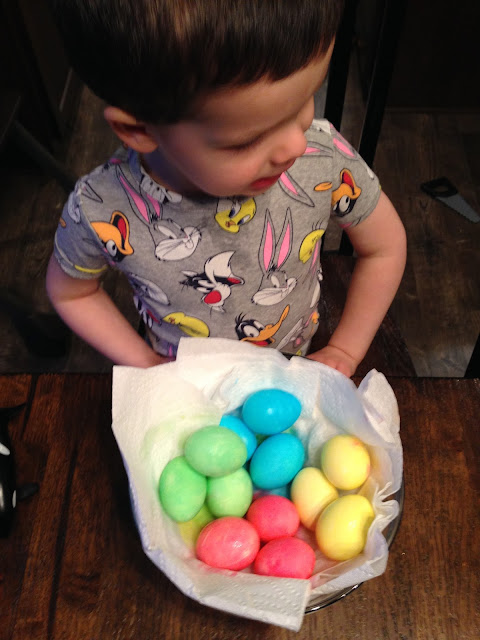 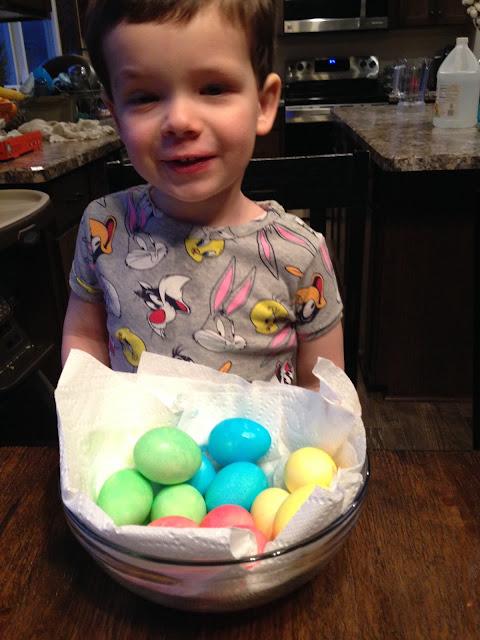 On Easter morning, both boys woke up pretty early. I had hid the eggs around the main floor, and Jackson was SO excited to search for and find them all! The worst part of his morning was absolutely when I took the basket to put the eggs in the refrigerator. 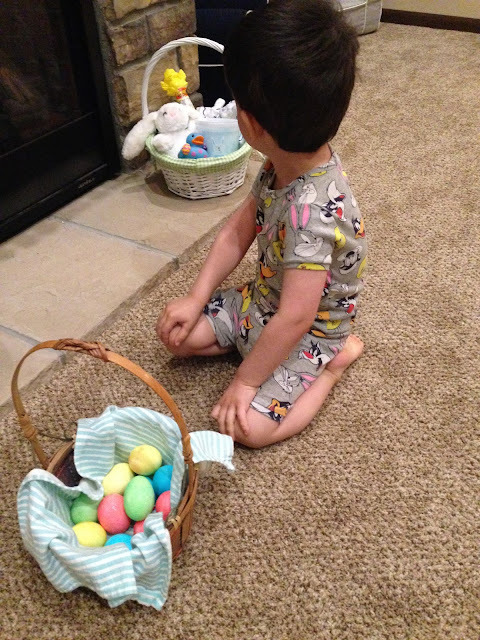 The boys checked out the goodies in their baskets. I may have selected candy for Lincoln that I knew I would end up getting to eat 😉 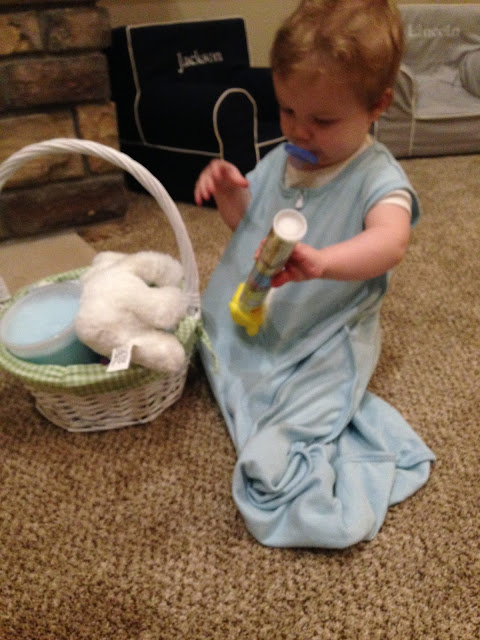 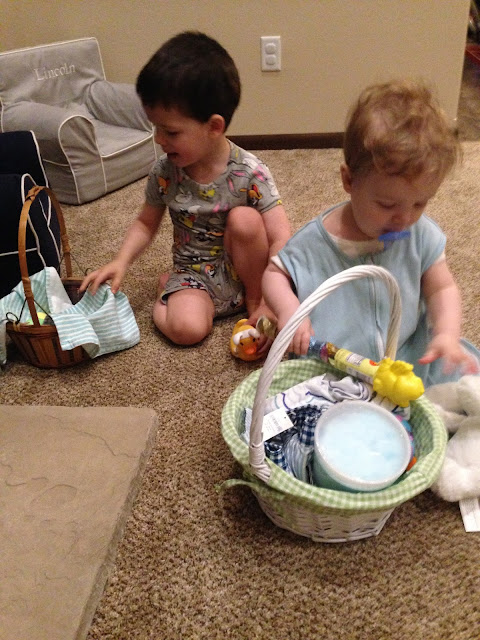 Some days I cannot handle the sweetness of these brothers. Jackson really is such a good big brother, as long as he isn’t trying to push Lincoln over. 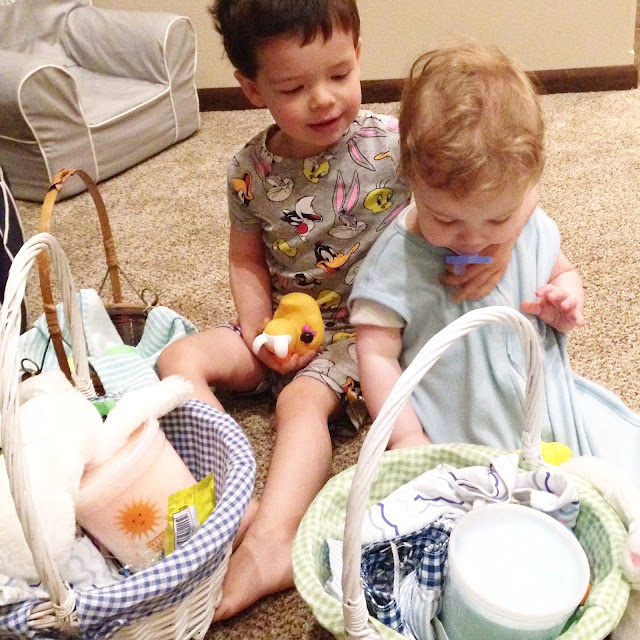 I got the boys dressed in their Sunday best. We failed to make it to church. To be honest, we haven’t been since Lincoln’s baptism. I know lots of people go to church with babies all of the time, but it just overwhelms me! We did decide the boys are finally at a stage that we will start trying to get there, so hopefully we can get back into that routine soon! 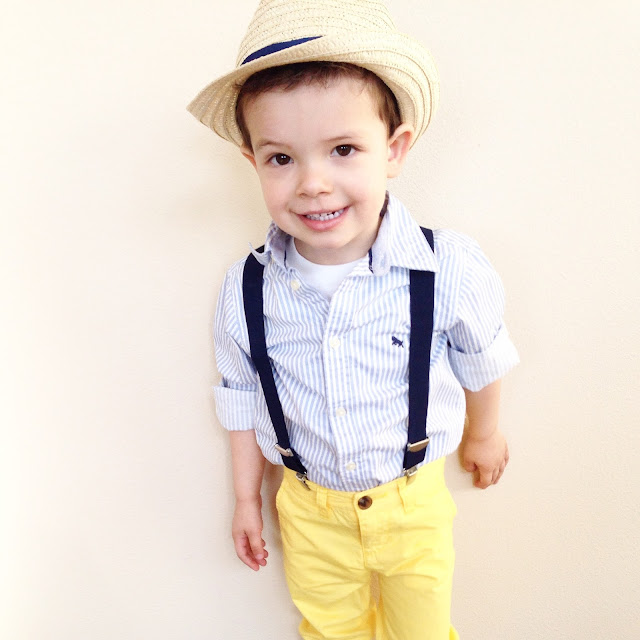 I can’t with those little suspenders and that hat. Can I just keep him exactly like this forever? 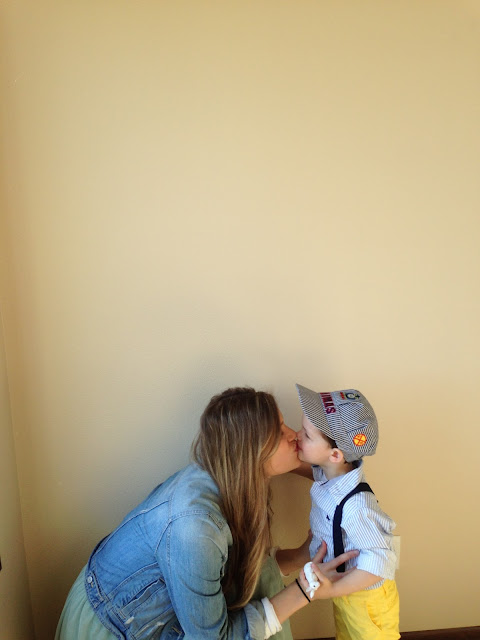 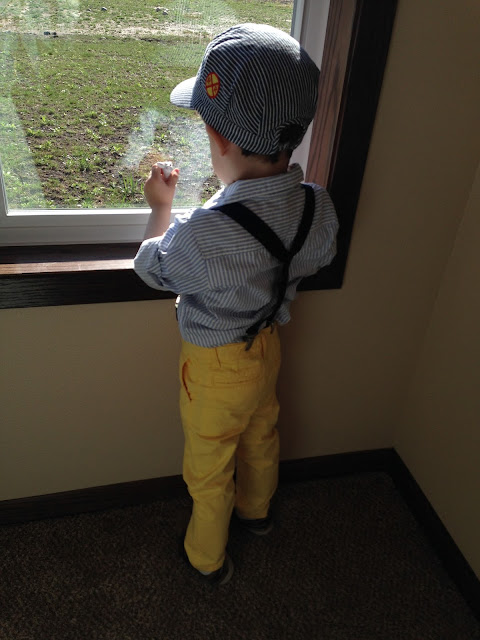 These brothers are the absolute sweetest! 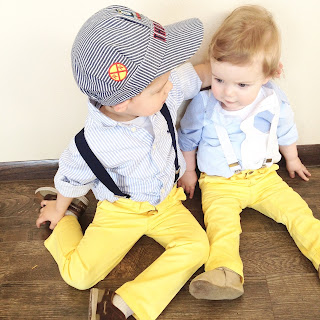 We went to my in-laws for brunch, and I managed to take approximately zero pictures. We changed the boys into some play clothes, and Jackson had the best time ever on an Easter egg hung outside. He became a pro at finding them with little to no assistance, and would proudly declare ‘I found one!’ It is so much fun watching him experience these traditions! Lincoln was just along for the ride, maybe next year, buddy 😉 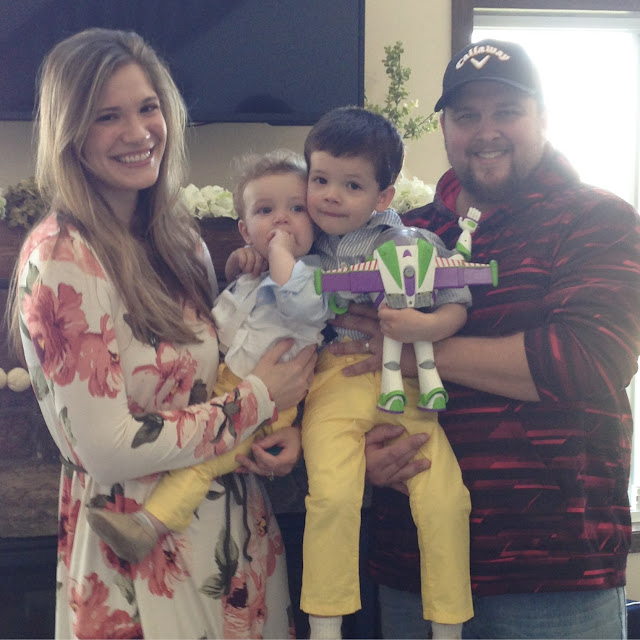 My parents gave the boys some Easter gifts, and Jackson got a Buzz Lightyear. He brings it with him everywhere, sleeps with it, and brings it into our bedroom at 5am and wakes me up with the sound of laser beams. The joys of being a boy mom! 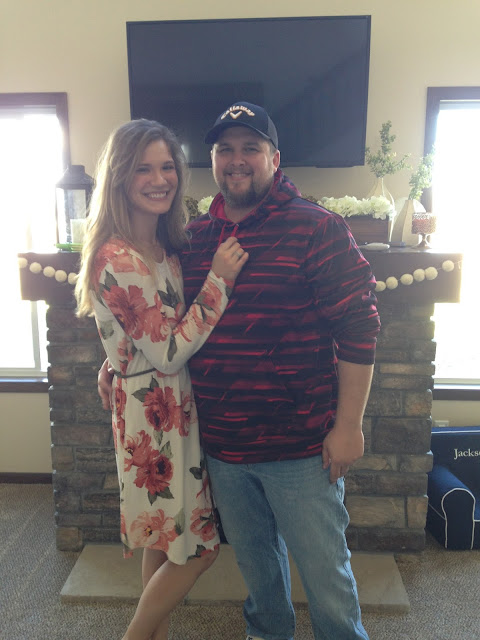 I also failed at getting any photos once we went to my grandparents for Easter dinner, but Jackson went on another egg hunt and both boys were shot shortly after eating. We came home, put them to bed, and relaxed before calling it a night!
I hope everyone had a wonderful Easter weekend. While I just recapped today, I am so happy we are already to the middle of the week and officially on the countdown to another weekend!