Posted on April 13, 2017
I have one confession today, and it is that I have tried (and failed) at doing a day in the life post at least five times in the past few months. I always have good intentions, and then by about noon I either forget to take pictures, or just lose ambition. But I finally managed a full day, and always love sharing the mundane details of what our real day-to-day lives look like! 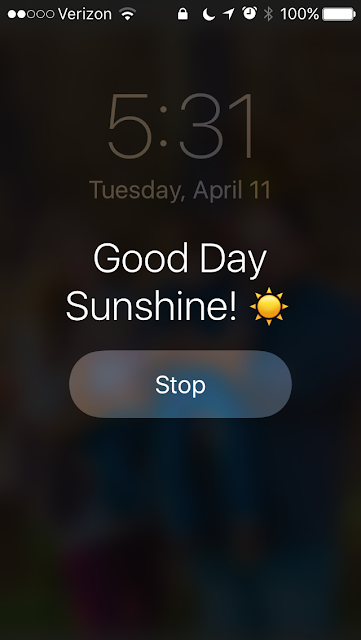 My alarm goes off at 5:30am. Often one of the boys has already woken me, but on this day they actually were still asleep. Lincoln woke up a few minutes later so I laid in bed until his cries told me to get moving. 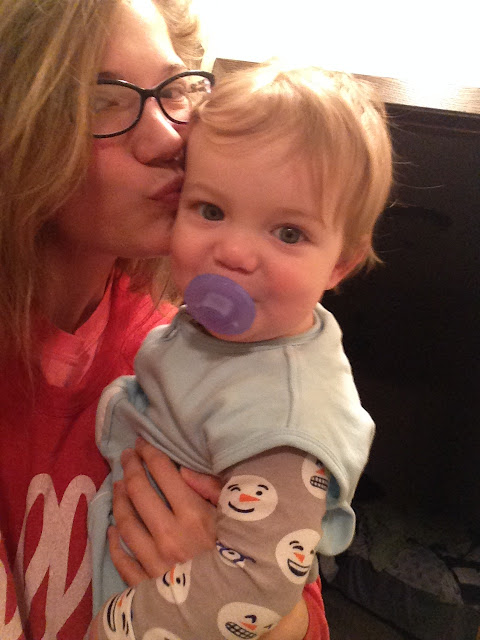 How can you not love waking up to this face!? I carry him downstairs, and nurse him in my bed. Once I lay him down, he almost always starts frantically breathing and fake crying. He is hungry and has zero patience! 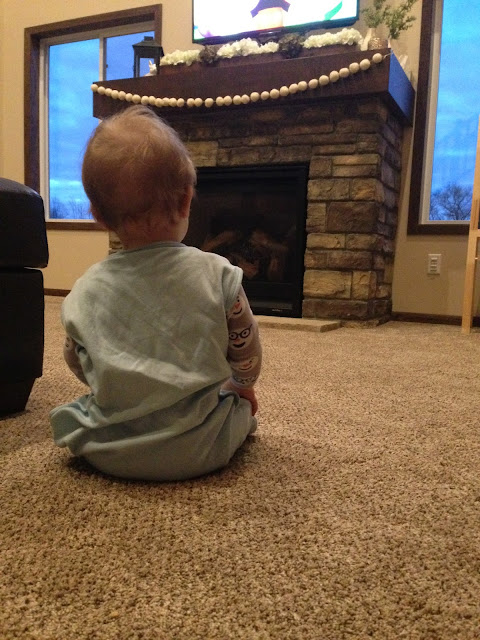 Both boys have been loving Mickey Mouse Clubhouse lately. Being honest, the television is absolutely what helps me manage to get ready and out the door for work most mornings. He sat there watching and didn’t move for a good fifteen minutes (which is a lifetime in baby time!) 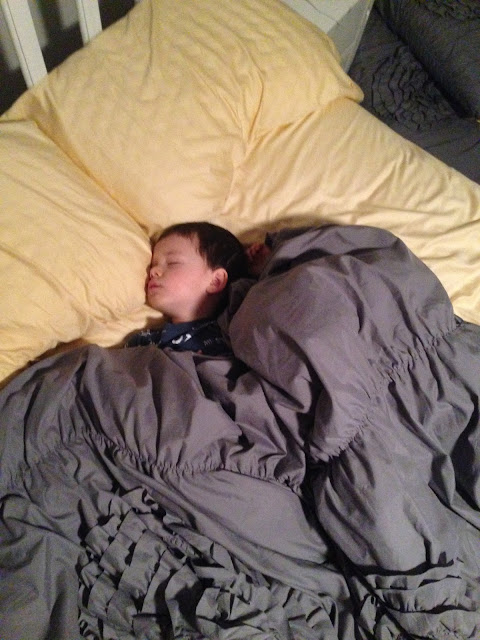 We don’t put the baby gate on Jackson’s door anymore because we finally don’t worry about him falling down our big staircase. Of course, that means that now once or twice a week he works his way into our bed. He has been sleeping in this week-I actually had to wake him up at 6:30 this day! 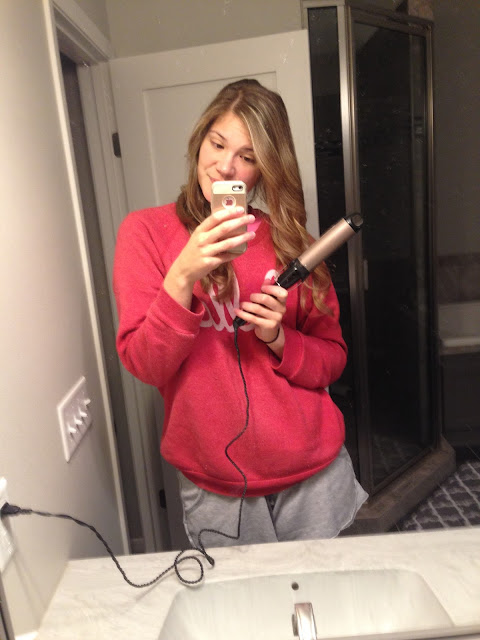 When the baby is actually staying put watching cartoons and the toddler is sleeping, I sometimes manage to actually do my hair. With the demands of my kiddos I am lucky to do my hair more than once a week. Surf spray and dry shampoo have become my new best friends! 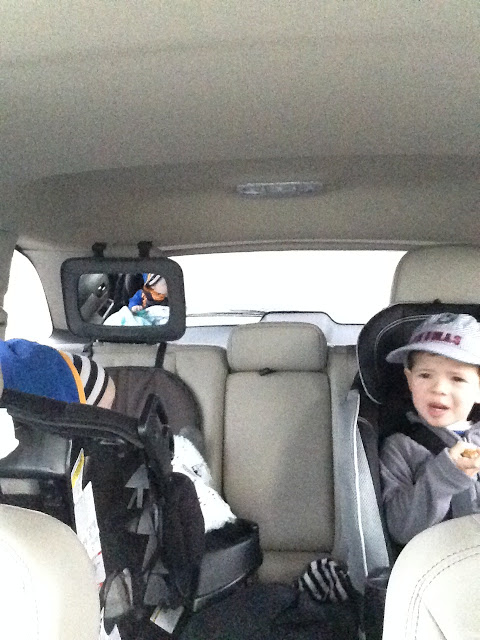 6:55am. Loaded up in the car and headed to daycare. After spending Friday and Monday with grandma, Jackson was not particularly excited to get back into the routine. 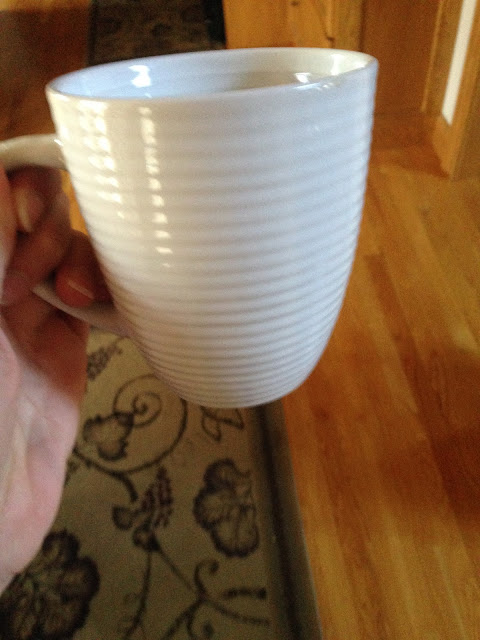 After dropping Jackson off, I bring Lincoln to my mom’s. He will only be there for another few weeks before starting daycare, so I have been soaking in taking a few minutes to have a quick cup of coffee and chat with my mom. While everyone is ready for the next chapter of daycare, it is always a little sad to know a phase of your life is ending. 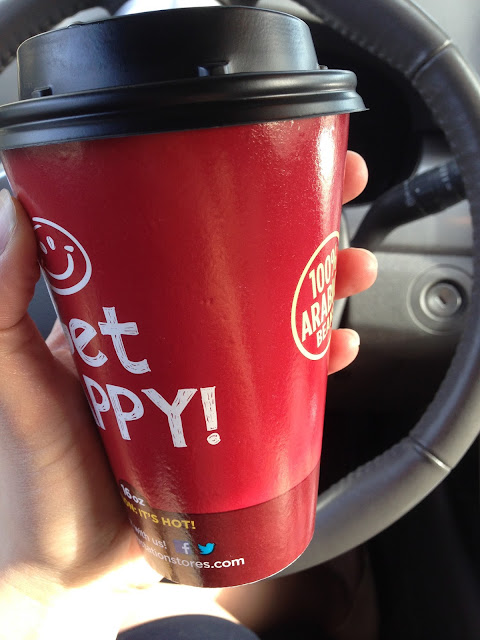 For whatever reason, a coffee from the gas station sounded so good, so I grabbed one on my way in. I almost always have two cups of coffee in the morning. 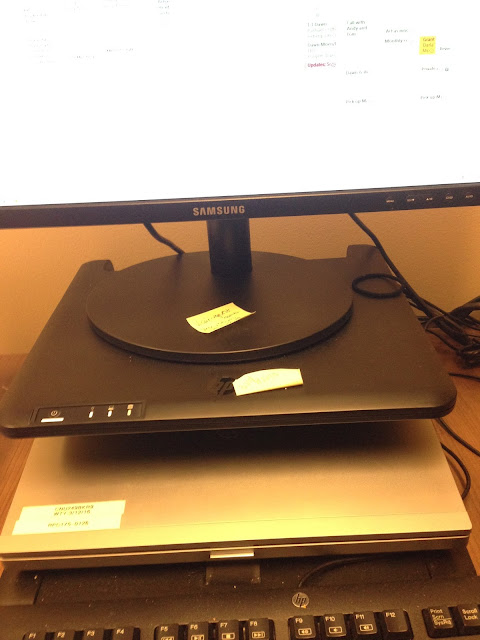 8:00am. At my desk. Based on the corner of the screen I was calendar stalking and probably trying to organize a meeting of some sort. 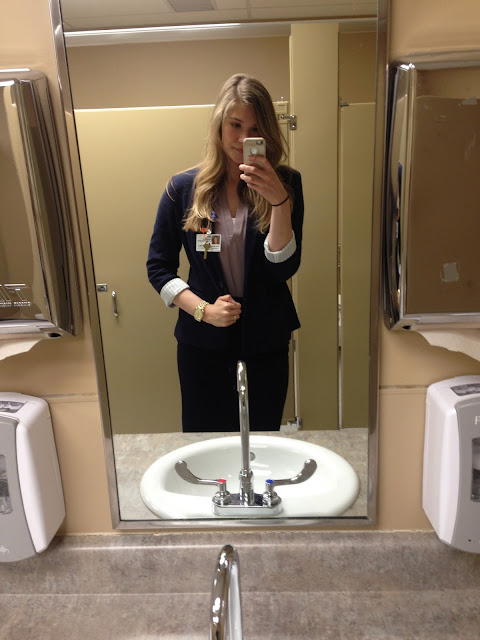 For pretty much no reason, I decided to look totally put together. A pencil skirt and blazer. That doesn’t happen often! But I am so excited to be transitioning to wearing skirts again, my work wardrobe has been feeling so stale with all of my winter clothes! 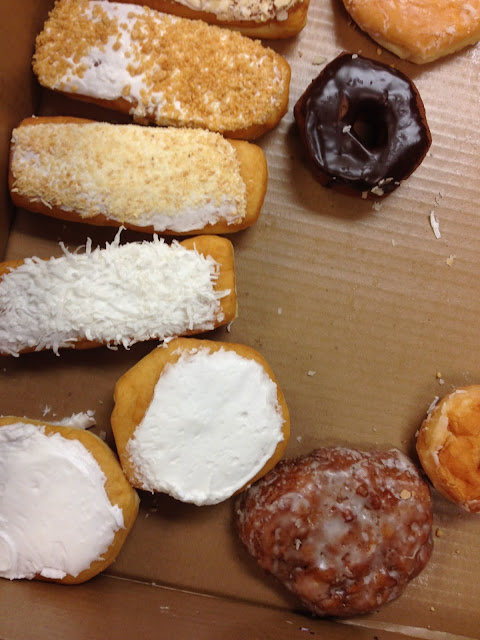 One of our employees is leaving and it was her last day so she brought in doughnuts. That big blueberry bismark in the bottom left corner? It was gone about five seconds later..woops. 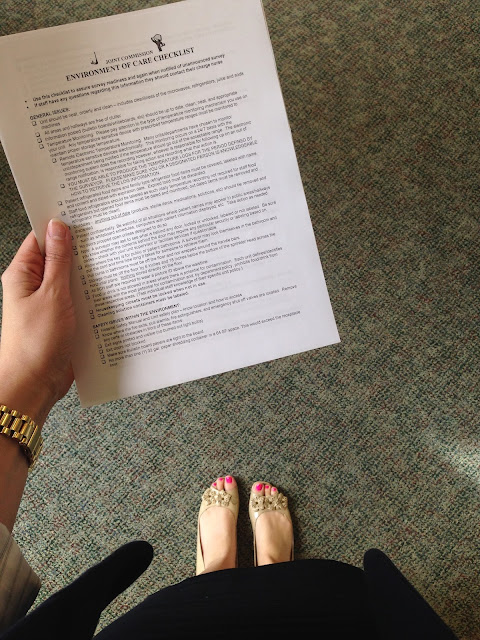 I had a walkthrough at one of our sites, so I got out of the office and drove over for that. 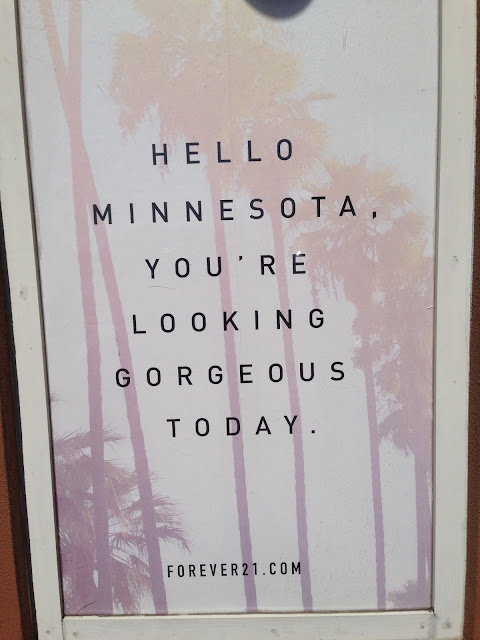 The site I reviewed is literally across the street from the mall, so I swung in over my lunch hour to quick check on an item I was looking for. I saw this sign outside and it made me smile. It really was a gorgeous spring day, and when you deal with harsh winters those sunny days in April are more appreciated than most.
The rest of the afternoon was spent at the office, working on some communications materials for my section. 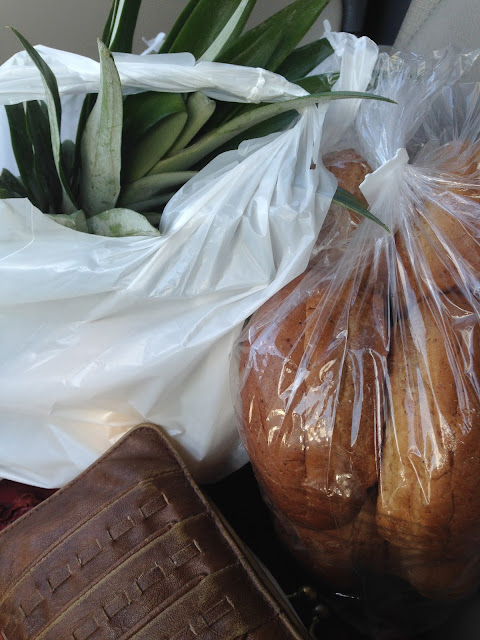 I left work at 4pm, and I swung through the grocery store on the way home to grab buns so we could grill burgers. And we have been wanting to make kabobs so I grabbed some ingredients for that later this week! Pineapples were 2 for $5, which is pretty much the best news ever. 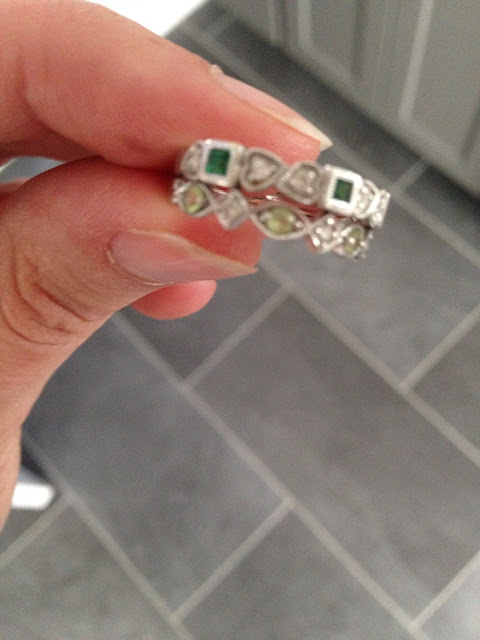 About halfway through the day I realized I wasn’t wearing my mother’s ring, but I had on my wedding ring. I usually either wear both or neither, so I spent all day semi-frantic wondering if I had taken it off or if it had somehow fell off. The second I walked in the door after picking up the kids I went to the bathroom and breathed a sign of relief when I saw it sitting beside the sink. Jackson was also frantically searching. We had to tear apart the toy room because he has a brown and a white bunny figurine that he carries with him everywhere lately. And we just could not find that darn white bunny. Until I basically cleaned the entire toy room and eventually found it buried beneath a storage bin. 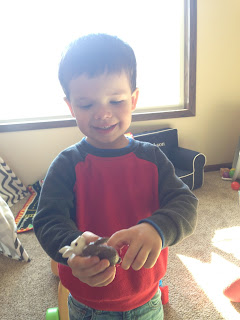 All was well in the world again as he showed me his bunnies. ‘THERE IT IS’ is what he was telling me as he pointed to the darn toy.
We eat at 5:30. I don’t have any pictures of dinner, because if there is anything Lincoln is more impatient about than getting his milk, it is getting his food. I usually spend dinner cutting food for Lincoln between every bite, appeasing Jackson’s requests for seconds or more milk, and picking up Lincoln’s sippy cup that he throws onto the floor after every sip he takes. We grilled burgers, and had waffle fries and asparagus on the side. The boys each had a ton of blueberries. They are so in love with fruit! 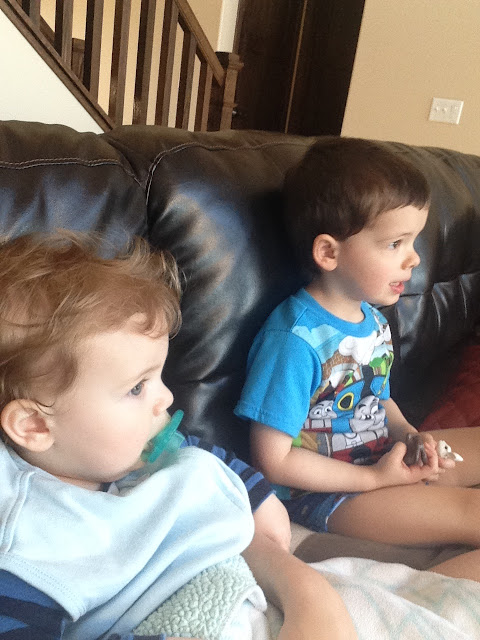 After dinner, the boys had baths, which I also don’t have a picture of because bath time is a process that I truck through as quickly as possible. I just really don’t like bath time. Which is why we only do it every other day 😉 Around 6:30, the boys and I snuggled up on the couch and watched an episode of Mickey Mouse.
Pretty much at 7pm on the dot every night, Lincoln is nursed one final time and goes to bed. I still haven’t decided when I will quit nursing altogether. We are close to the one year mark but I have a feeling I may keep at least one of the two feedings we have left for a little while longer. Maybe dropping the evening feeding so that we can start taking turns with putting the boys to bed? I just can’t make up my mind. 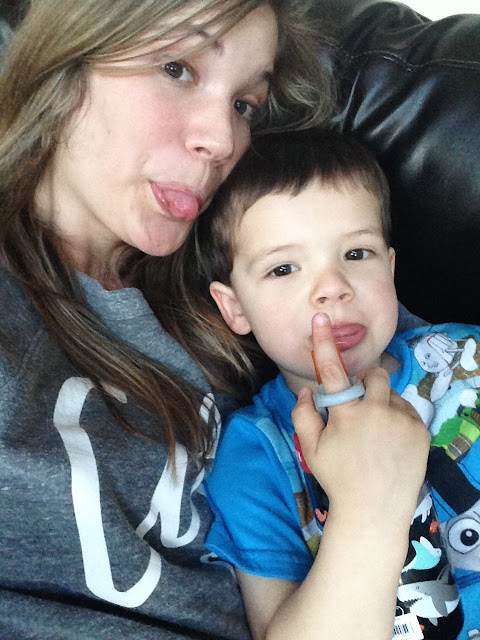 After baby brother was asleep, Jackson and I cuddled a bit more and finished his episode of Mickey. And in true boy fashion, he stuck out his tongue and spit for the camera. 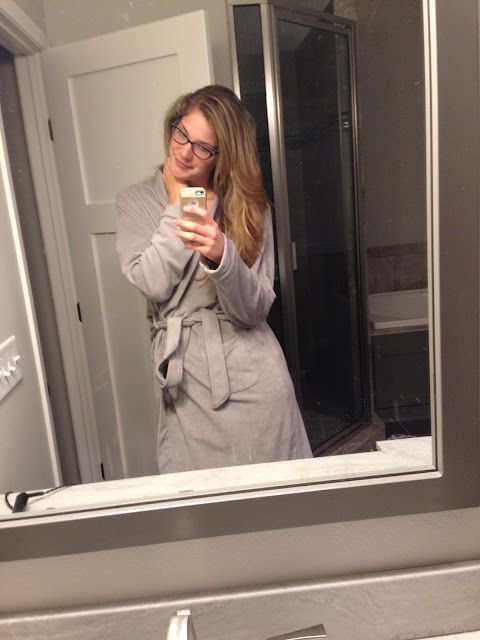 Mike took Jackson up to bed at 8:00. I jumped into the shower. I finally stopped washing my hair every day, which is what I have done for as long as I can remember. I still typically wash it every other day, but it is nice to throw it up and not have to worry about drying it or styling it the next day! Also, my robe is the most comfortable robe EVER and was a super deal at Target. It is nice and long, and so soft and stretchy. 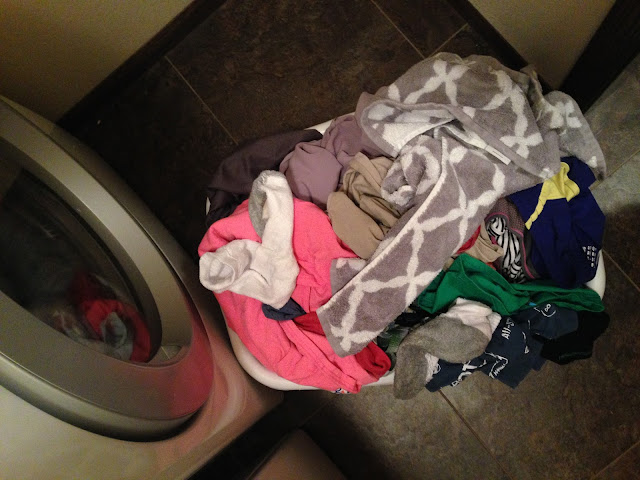 I did some laundry before Mike came downstairs from Jackson’s room. I always end up doing almost all of our laundry on the weekend, and that is just no fun. So, I have been trying to do it on those mundane evenings during the week where I typically just lounge on the couch, and it takes such a weight off of my shoulders during the weekend! 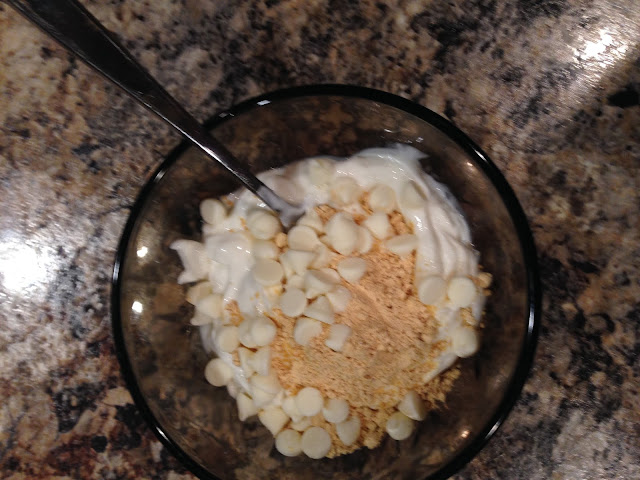 I eat WAY too many sweets. We have been trying to still satisfy the cravings with healthier options, so Mike has been making lots of fruit smoothies lately. We had a little bit of greek yogurt, so I added a scoop of peanut butter powder and some white chocolate chips. It wasn’t too bad, but I obviously would have preferred a cookie. #sugaraddict 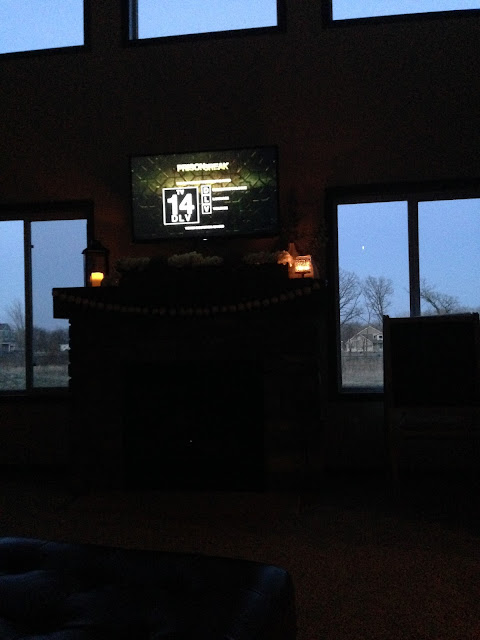 At 8:30 we settled in for Prison Break. We both kind of agree we probably wouldn’t be watching it if it were a new show, but because we watched the first four seasons years ago, we will truck through. I am definitely curious to see where they go with this whole season-it is filled with suspense, for sure! 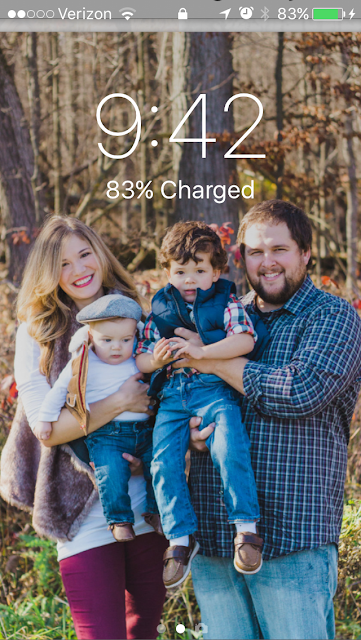 I threw that last load of laundry into the dryer, climbed into bed, and called it a night! Now that the kids pretty consistently sleep through the night, we make it past 9pm more often 😉
Our days really are so predictable at this season in life, but I always love to look back and see how much things change over time!
Linking up with Annie today!

Friday Favorites: The last of 2016 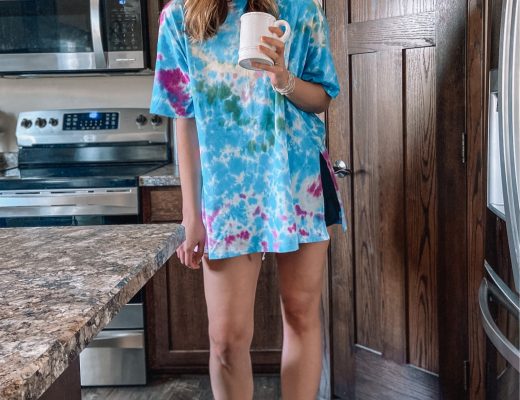