Posted on April 3, 2017
Another Monday, another 5am wakeup call by the kiddos. While I hate to see the weekend go, this one was a good one!
On Friday, I got some news over my lunch that my younger brother and his fiancé had picked their wedding date, and it is four months away! I had already known they were entertaining a fall wedding and would likely have a shorter engagement, but apparently a deal came up that was too good to pass up, the pastor was available, and that was that. SO, our family is in total wedding planning mode now!
Aside from the excitement of the wedding date being set, on Friday afternoon my brother and sister in law came over to get food prepped for Saturday. My husband and BIL both have smokers and decided to make their own recipe for ribs. And for those of you with smokers, you know it is a labor of love 😉 So while they prepped I got to hang out with my SIL for a bit, which is always fun. The kiddos played and by the time Jackson finally was put to bed, he was so tired from a day spent at grandma and grandpas and playing that he closed his eyes and was out before I even laid him down all of the way. Now if only he would do that every night! 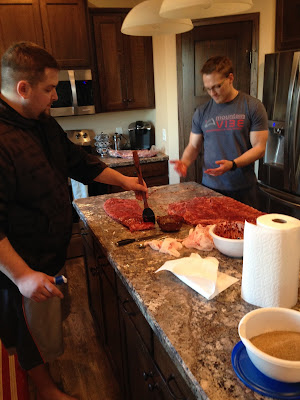 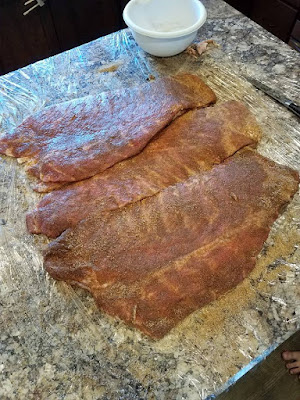 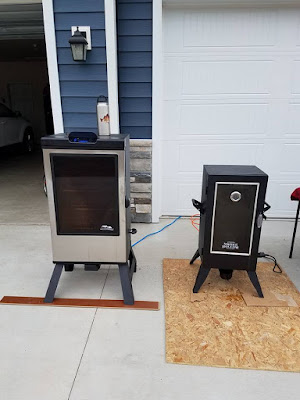 On Saturday, we were up and at em and made an early grocery store run for dinner. On the menu was ribs, potato salad, corn bread muffins, and homemade banana pudding. If you have ever had Famous Dave’s, they sell their corn bread in the stores, and it is SO good. Lincoln was just along for the free paper crown. 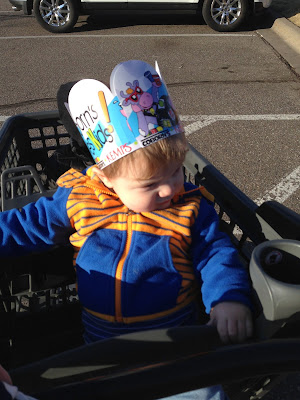 Once we got home, two of my sisters in law came over while the guys started up the smokers. And you guys, they totally took over and cleaned my house! Katie literally disassembled my couch and vacuumed every last nook and cranny of the thing, and Laura organized the toy room, which is already back in shambles (sorry Laura!) You just can’t keep that on clean for longer than thirty seconds. But still, I think I need to invite them over more often because I don’t know if anything is better than someone else vacuuming for you 😉
The banana pudding custard took SO long to make, I honestly declared I would never make it again. I swear I stood there stirring it to thicken for almost an hour. But then I tasted it at dinner, and it was that good. So good that it is worth standing over the stovetop for an hour. The recipe is out of one of our books, but I will try to share it soon! 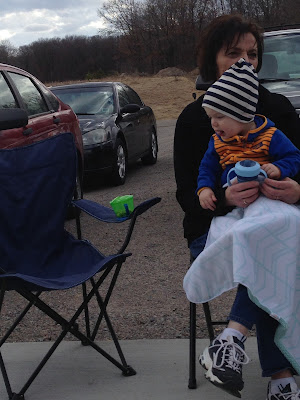 After dinner, we all hung around, we took a walk around our little neighborhood, it was just so nice out! Mid sixties, and we had all of the windows open while the kiddos ran around outside pretty much all day. These are the spring days that we dream about all winter! We eventually got the kids to sleep, and were so exhausted, we watched a little bit of The Chapelle Show and were down and out early.
We woke up to a cloudy and raining morning Sunday, so most of the day was spent inside. I made an early grocery store run with Lincoln, to get some breakfast items and stock up on some things for the baby shower I am hosting at our house next weekend! 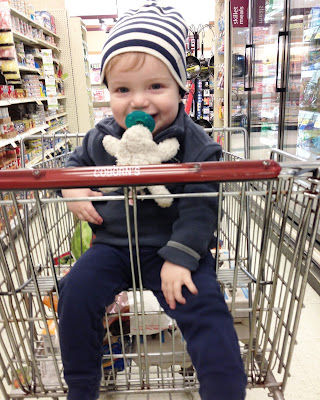 My sister in law called shortly after, and we ran into town for some party supplies, and we came back and worked on some projects for the shower! I am really excited to pull all of the little pieces together, I think it is going to turn out so great!
After she and my nephew left, we lounged around the rest of the day. Our kids were having one of those days, so it was basically a countdown to bedtime. We watched The Office, which I was just told is going off of Netflix next month!? I have no idea how I will survive. Buy the entire series on Blue Ray I suppose. We have watched the entire series through three or four times, and I don’t see us stopping any time soon.
We went fancy and threw in frozen pizzas for dinner, and finished off the night with the season finale of The Walking Dead. You guys, if you watch it, IT WAS SO GOOD. One of those finales that is just insanely gratifying and has me dying for it to be October so we can watch again.
Don’t forgot, tomorrow is the first day of the Tuesday Outtakes linkup! Join in and share all of the photos from the month of March that didn’t quite make the cut 🙂
Linking up with Biana today.