Posted on January 9, 2017
This month was a big one for our little guy! He saw his first Christmas season, had a total change in his eating, and continues to grow more mobile and playful by the day. He is the sweetest thing, always quick to offer a smile and a giggle. He is curious, I have a feeling he is going to be our child that we have to watch like a hawk because he has no fear! I just love this little guy so much! 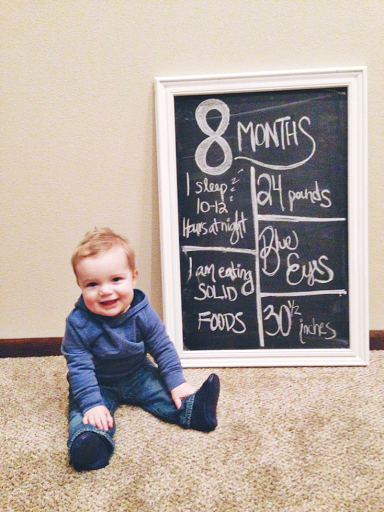 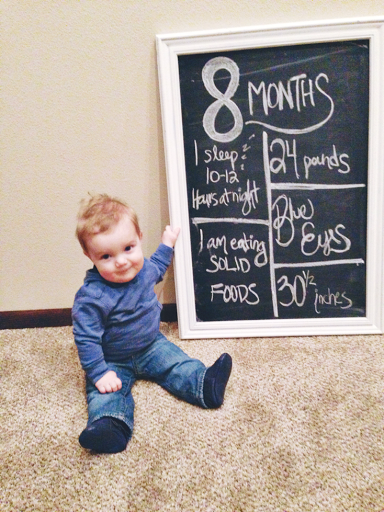 Age: 8 months
Height: I measured between 30-31 inches. It is a little harder as baby wants to try and eat the measuring tape and big brother obviously thinks the measuring tape is his and throws a tantrum when mom refuses to hand it over. 30 inches puts him in the 99th percentile, 31 puts him well above the 100th. He is quickly growing out of his 12-18 month clothing, and is starting to wear size 18-24 months at places like Gap and Old Navy. He is in size 4 diapers, and likely will be for awhile.
Weight: 24 pounds. 98th percentile.
Milestones: Not quite crawling yet. He has been getting up and rocking on all fours for what seems to be at least a month, though. He manages to get wherever he needs to go regardless. Lots of pivoting and scooting backwards. I have seen him put his knees forward in the crawling motion about two times before he decides to drop back onto his belly. He waited until the tree was taken down, so now he has my full approval to start!
Sleep: He continues to sleep through the night! I promise to share soon what we did to make the change, but he went from being one of the worst sleepers ever to a sleep angel, pretty much over night. He is an early riser, many days being bright eyed by about 5am. But ultimately, he goes down between 6-7pm, and will sleep straight through until 5ish. He also naps so much better now, most days taking one solid nap in the morning and one in the afternoon. Our biggest challenge is getting those naps timed right so that he isn’t crashing and ready for bed at 5pm. Which happens quite a bit!
Best Moments: Getting to do Christmas with this guy was so much fun! His brother was only four months old at his first Christmas, and it was pretty hard. Lincoln is at such a perfect age where he seriously loves anyone who acknowledges him, thinks things are so funny, and is just a joy to be around.
This month also brought out one of my absolute favorite things, his cheeser smile. He will do it to mimic you or if he thinks you are super funny. He scrunches up his little nose, closes his eyes, and tilts his head backwards. It is so. stinking. cute. I call it one of those things that is ‘ugly-cute’. It is such an obnoxious face, and he looks so hilarious when he does it, and oh my it is just the most precious thing and everyone in our house loves calling him ‘CHEESER’. 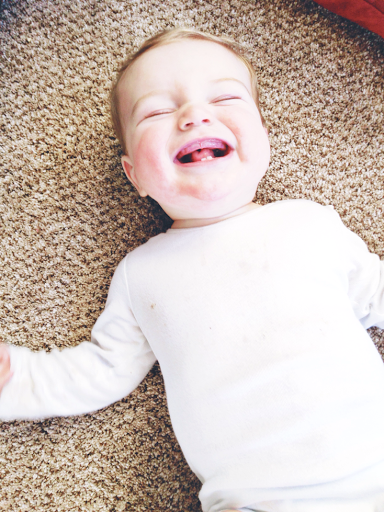 Worst Moments: This was honestly a really good month. No tumbles, no sickness, no stand out events that were bad. I will call that a win! Jackson has had a hard time learning to share all of his toys, including Lincoln’s own toys that big brother has claimed as his own. When Lincoln is playing with the wrong thing at the wrong time, Jackson has on more than one occasion ran across the room to push Lincoln over backwards. It always makes me feel so bad for the poor baby, but I know the day will come where he will be able to hold his own and fight back 😉
Eating: He has continued to refuse baby food. Last month, we started letting him try tiny bits of real food off of our plates, and figured maybe baby led weaning was the way to go, considering he wanted nothing to do with anything pureed. And, somehow this month, we went from a baby who eat essentially no food, to eating three square meals of real food every single day. A month ago he would gag on almost anything that wasn’t mashed or pureed, and now he has eaten things like eggs, pancakes, meatballs, peaches, strawberries, b0       lueberries, cheesy hashbrowns, and a number of other things. Getting bits of garlic cheese bread is basically the highlight of his life, and so is getting tastes of dessert. I really try to make sure we are limiting the new things he is exposed to, but to be honest it has been a bit of a challenge because eating in front of him elicits a growl and shriek within about two seconds if he does not immediately get a bite! I am truly a little bit baffled at the change in his eating, and how quickly it happened.
Teeth: Still just those bottom two chompers! They have really come in, and it makes his cheeser smile that much more funny to watch!
Likes: Absolutely any and all food, bath time, babbling with his brother, being tickled, having his diaper changed, his sleep sack, his wubbanub, the baby channel, car rides, toys that make noise, anything he can chew on, practicing his crawling, puppies.
Dislikes: Not getting food when he wants it, when big brother shows him a little too much love, being shoved by big brother, when someone walks by and doesn’t pick him up.
Lincoln, you are the greatest blessing to us. You continue to challenge us, and show us that you are unique and one of a kind. You have humbled me more times than I can count by reminding me that you will do things your way, in your time. I am so lucky to be your mama, and love you more than you will ever know!