Posted on December 8, 2016
Oh my goodness. To say that Lincoln has changed in the past month would be the understatement of the year. While he still holds his feisty, independent personality, he truly has become such a happy, sweet baby. Long gone are the hour long crying sessions, refusal to lay on the floor, and dislike of sleep. He has a giggle that will melt your heart, eyes that twinkle when he smiles, and the most perfect dimple on his right cheek that I could kiss all day long. He is at that most perfect stage where, if someone asked you to describe a ‘baby’, it would be him. Sweet, squishy, and loveable baby perfection.﻿ 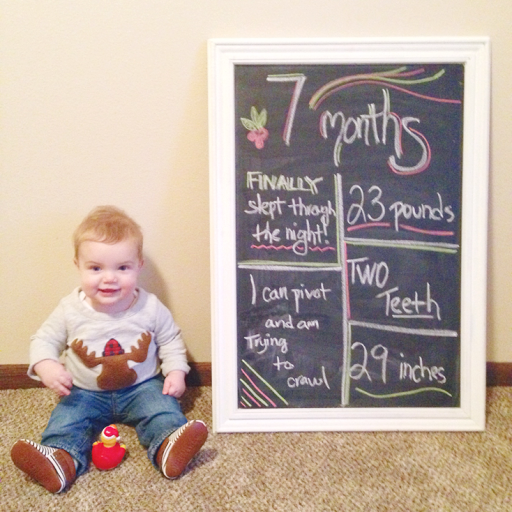 Height: 29 inches. Apparently I got a little generous in my measurements last month, because he measured 28.5 at his 6 month appointment. However, measuring him he is in fact 29 inches now! This places him at the 98th percentile.
Weight: 23 pounds. Again, he must have eaten a huge meal the last time I weighed him because he weighed less at his 6 month appointment than I had measured, and he is now actually at 23 pounds. Even so this has him sitting at the 98th percentile. He is pretty darn snug in his 12 month jammies, and basically all of his clothing has moved to the 12-18 month size. He wears size 3 shoes and size 4 diapers.
Milestones: He started rolling over both ways this month. Before he would roll off of his back onto his belly but then get stuck, and as a result usually would scream shortly after. Now he can roll in just about every direction whenever he wants. He is also scooting, so while he cannot crawl forward yet, he moves backwards pretty quickly and I really cannot leave him unattended and trust to come back to find him where I left him. He has scooted across the living room and wedged himself underneath the Christmas tree, and can maneuver himself to get just about any object in his sight. He is not quite getting up on all fours yet, but he is really pulling his knees up and getting his little booty in the air. He is trying so hard to crawl! He is a really determined little guy, and the more independence and body control he gains, the happier he seems to become!
Sleep: HALLELUJAH HE HAS SLEPT THROUGH THE NIGHT! I have another blog post to highlight what we did, but ultimately we did force a few tears. He was back to waking up 3-4 times a night, and we were about to lose our minds. Not only that, but he was napping terribly as well, many days getting by on one 30-45 minute nap. We decided that the best thing for everyone involved as to do a little tough love. A week of tears, no matter how hard, seemed worth it compared to seven months of miserable sleep. Again, I plan to share our process soon, but he only had to ‘cry’ for one night. He woke up crying once the first and second night but put himself back to sleep, and since then, he has slept 12 hours every night! Not only that, but we are laying him down awake and he is putting himself to sleep. I cannot express how much control we feel like we have gained back over our lives with this new sleep schedule! And, Lincoln is liking it too and is benefitting because the poor baby was not getting near the amount of sleep he needed, and we know it was affecting his mood throughout the day. This is just the best and by far the greatest area of change this month. 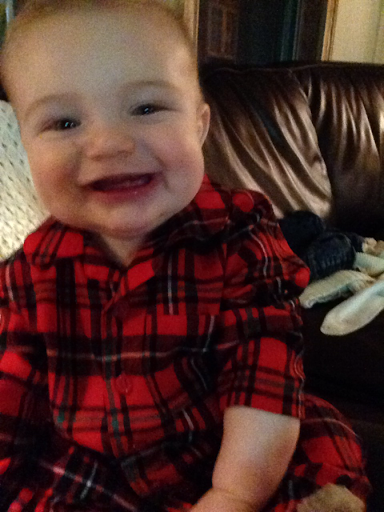 Best Moments: Sleep. Sleep. Sleep. Watching him learn to play with his brother. Playing games and really having him begin to interact with those around him. And dressing him up in all of the Christmas jammies. That is probably just a best moment for mom, but hey, I can’t help myself!
Worst Moments: He came down with a random stomach bug one weekend this month, and we checked on him during nap to find that he had thrown up all over himself. Poor baby, and always so scary because you worry about them choking. Over the following few hours, he proceeded to throw up pretty much  non-stop. After one of the instances, his little eyes and lips actually turned blue for a few seconds, and it scared me so much! The color returned quickly, and after about 3 hours he didn’t throw up at all and seemed pretty good to go. There is just nothing worse than a sick baby!
Health: Aside from the random 4 hour stomach bug, he has been pretty healthy! He had a cold but got over it fairly quickly. I really believe that breastfeeding helps to keep my babies pretty well protected from illness during their infancy, and for that I am grateful. The scariest part of having a sick baby is that they are incapable of expressing how they are feeling or their needs. Having some extra protection by nursing is fine by me!
Eating: This guy just does not like baby food one bit. He will get a bit adventurous when he is offered the veggies, but he purses his lips and outright refuses basically any fruit. He does, however, love real food, so I have conceded and am just going with the flow of what feels natural and allowing him to taste things as the opportunities present themselves. He loved the sweet potatoes he got to try over Thanksgiving, and goes nuts when given a teeny piece of bread, or a potato chip crumb if he is really lucky. He also ended up eating nearly all of the pineapple off of my Hawaiian pizza last week! I couldn’t feed it to him fast enough! We are basically moving in the direction of baby led weaning this month, especially when I figure that, at 7 months, he is not far off from being able to feed himself very soft foods. I have no plans to buy more baby food! Feeding Lincoln has been an entirely different experience than feeding his big brother (here is Jacksons 7 month post!), who by this point was eating 2-3 solid meals every single day. I am very curious to see how this process goes moving forward for us!
Teeth: He has his two bottom teeth! Ah, I love the toothless, gummy smiles of babies, but seriously is there anything cuter than when a baby has those two bottom teeth?! I think not!
Likes: Eating the food of anyone around him, the baby channel, scooting backwards, grabbing his toes, eating his toes, giving kisses, being tickled, being thrown in the air, when his big brother talks to him, being held, going on walks, puppies, and he has fallen in love with taking baths! He loves to stand while the water finishes running and put his hand in the stream, and then he loves to kick and splash like crazy!
Dislikes: When someone walks by without picking him up, the sleepy cat cartoon on the baby channel (he is all smiles until it comes on, and then he gets MAD!), when Jackson gives him unwanted hugs, basically all baby food. His list of dislikes has just been getting smaller and small every month, and we are not complaining! He really has become such a happy guy! 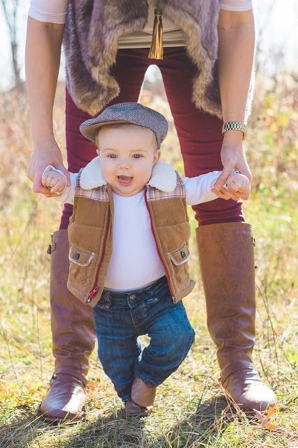 Lincoln Michael, you are the sweetest soul and have become such a joy in our lives. You have tested us and pushed us on many occasions, but the reward of watching you grow and thrive has been more than worth it. We are entering such a magical stage with you, and know that we are all going to start having so much fun together. We love you to pieces, honey man!
﻿