The Next Breast Thing

For those of you that follow along with me, you likely know by now that my babies are on the larger side of the scale. They are both proportionate, healthy, and doing great, but boy, are they big. They are both off of the charts for their height and weight, and don’t seem to be slowing down any time soon.

Needless to say, babies who grow that much eat, a lot. Here we are, over five months in with Lincoln, and sleeping through the night is a concept makes me laugh out loud, because I would do anything if we could even get it down to ONCE a night at this point. While the sleepless nights may be driving me a bit crazy, I will say that nursing makes it much easier to handle. We still have the bassinet in our room, and when Lincoln awakens, I simply pull him into bed with me, lay alongside while he nurses, and we both fall back asleep. Most of the time, I am awake no more than a few minutes for a feeding, so at least in that respect I am thankful. 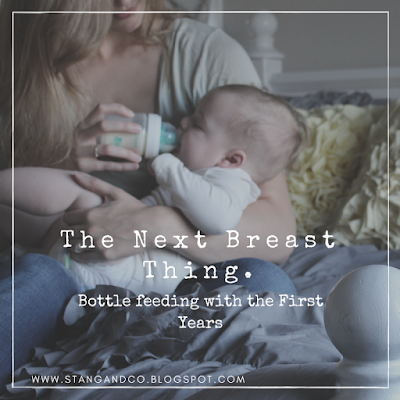 Once I went back to work, we had to introduce bottles during the day. Okay, rewind. I tried introducing bottles before going back to work on a few occasions, but the little guy has gone through some rough patches, involving lots of crying and being upset all.of.the.time., and on those days the last thing we were going to do was mess with a feeding method that calmed him down. So, on my first day back to work, I dropped him off with grandma, handed her a stack of bottles, and made a dash out the front door. And he did surprisingly well. While I would not say that he took to the bottles like a fish to water, he at least was willing to drink out of them. If he was propped in the perfect position. And had a view he could enjoy. And a hand to hold. And was being bounced. I do not lie when I say that my precious boy is demanding.
So, while feeding was going okay while I was away, it was not going great. And then I came upon the Breast Flow bottles. And knew I had to try them. I have seen plenty of bottles with valves and countless parts claiming to improve flow and risk of colic, but what was different about these bottles was in the design of the nipple itself. It has a suck and compress feature, so it truly operates as a breast would during feeding. I have watched both of my babies take bottles with milk dripping down their necks because they stopped sucking, but the bottle flow did not. And while neither of my babies have had major issues with gas or colic, and therefore I have never branched out much in terms of trying bottles, I figured, why not give these a try? 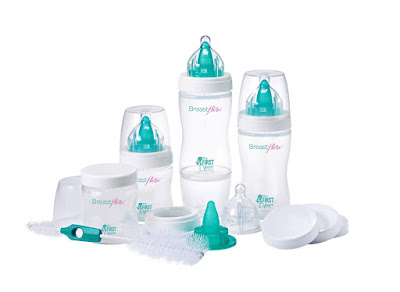 And you guys, I am sold. I left these with my mom, and after his first feeding I was truthfully a bit discouraged. He was not particularly hungry, and did not seem thrilled with them, and so I thought shoot, I guess it’s back to the old bottles. And then a few hours later, when he was truly hungry, I received rave text messages that he LOVED them. The biggest thing that was noticed almost immediately was that my baby truly had complete control over the flow of the milk. He has reached that age where he gets distracted during feedings, and when he decided to take a break, he was able to leave the nipple in his mouth, with no milk flow disrupting him. They have taken him a bit longer to drink than his other bottles, but that is likely because he is a) not losing an ounce that had in the past been dripping onto his neck and clothing, and b) he genuinely seems to enjoy his feedings and is taking his sweet time, because these bottles allow him to do so. In fact, since using the Breast Flow bottles, he has been falling asleep during feedings, which he has never done before! 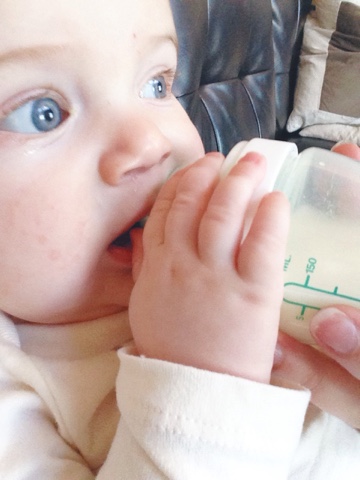 In addition to feedings being easier, cleaning has become easier too! The nipples are very wide, and to clean them does not require special brushes, as there is enough space that ensuring all milk has been washed away is very easy to do. While it may have one more part than our old bottles, the ease of cleaning and ensuring they are completely sanitized with each wash makes it totally worth it.
Aside from nipple design, the starter kit also comes with a storage container for formula if that is your method of feeding, as well as a brush for cleaning. And, a particularly thoughtful part of the design is that the covers snap onto the bottom of the bottles! This is a lifesaver when trying to give a baby a bottle and not wanting to set down the lid on a random surface, making it one less thing for a mom with a hungry baby to have to worry about 🙂
I would recommend these bottles a hundred times over. I have seen so many styles and products out there, but none that so closely reflect the real thing as these. I am still trucking along with breastfeeding, and it is a comfort to know that when I am away, my baby is receiving something as close to the real thing as possible. If I can’t be there, at least I know he has the next breast thing!
Have any of you tried Breastflow bottles before? Are you thinking about giving them a try? I would love to hear your thoughts, and am happy to answer any questions that you may have! 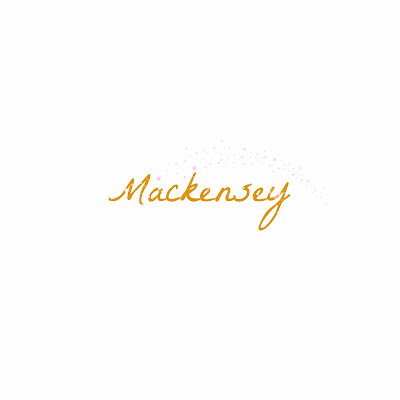 *This post is sponsored by The First Years. Thank you for supporting the brands that support Stang&Co.
Linking up with Annie.