Postpartum life is very real. Very real. So much goes into it that you aren’t prepared for or don’t think about. One of those things is returning to your pre-baby body (which honestly will probably never 100% happen). After having two pregnancies, I can say that recovery definitely was different. While I wouldn’t say I had major struggles, the second go-round was not as easy as the first. For my own memory, and to share the realities of getting your body back, I decided to document the few months after Lincoln was born to see the changes that were happening. 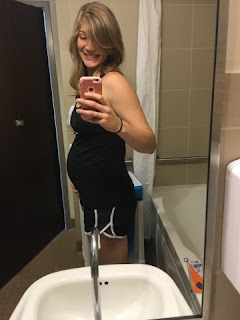 I was obviously still rocking a major bump at this point, but it is also crazy how small I felt now that the baby was in my arms and not in my belly. Obviously, I still had a solid 20 pounds or so to go. 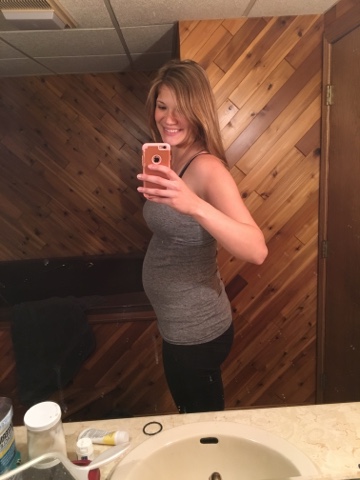 My belly really did a lot of shrinking in the few days after Lincoln was born. I am going to credit a lot of that to breastfeeding. Those afterpains were unreal you guys, I honestly felt more discomfort with the pains during nursing than I did from any of my contractions during labor (of course, my labor was pretty darn easy). I would actually brace the sides of the bed every time I fed him for about a week because I knew they were coming, and I couldn’t talk when I had them. They were so painful, but I know that nursing definitely helped speed up the process of getting my uterus back down towards its normal size much more quickly. What this picture doesn’t show is how soft, deflated, and alien a belly feels three days after baby. It may be smaller, but things are definitely still stretched out and it feels like a deflated beach ball. 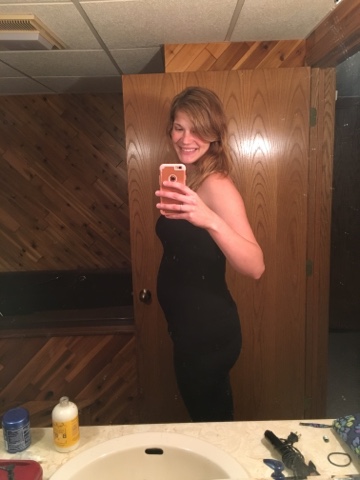 There was a little bit of shrinking in the next week or so after delivery, and I was able to squeeze into some of my normal jeans for Lincoln’s newborn pictures. They were definitely a bit snug, but they buttoned and I could wear them without feeling like I couldn’t breath, so that did a lot for helping me feel a bit more ‘normal’! Of course, I should note that the jeans I was squeezing into were my very stretchy jeans! I definitely wasn’t rocking anything skin tight or structured! At this point though, I was probably 18-20 pounds above pre-pregnancy weight. 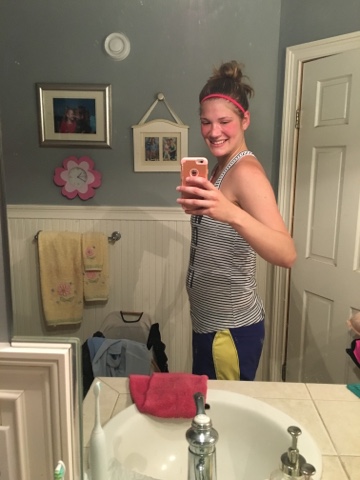 This is the point where I think the post-baby pooch really became less evident. There was still definitely some ‘pooch’ going on, but not where you would call it a post baby bump. Unfortunately, it starting feeling more like a ‘gut’ to me at this point. Clothes continued to fit more normally, and I was able to start wearing my favorite jean shorts again. Which was perfect timing as the summer weather started to arrive. I also started going on lots of walks and easing my way back into short runs. *I know doctors say to not exercise for six weeks after delivery, but the minute I felt discomfort I always stopped. This is the point where some frustration set in. From about 1-3 weeks post baby, I really seemed stuck at 13-15 pounds above pre-pregnancy weight. I am breastfeeding, which makes it challenging because sometimes the hunger is UNREAL, but I also hit the trail mixes (my ultimate weakness) during snack time a little hard. So, at that point while I still definitely kept eating to keep my supply up, I did consciously start working to stick to as healthy of foods as possible. 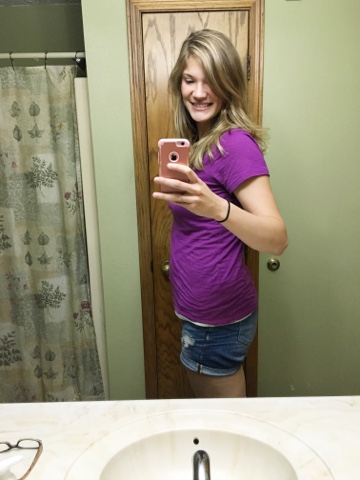 Up about 13 pounds from pre-pregnancy weight. I started feeling closer to normal in my clothing. In the photo above I am wearing the favorite jean shorts that I mentioned, and they were definitely feeling more comfortable than they were a week or two prior. I also wore a pencil skirt one day for the interview for my new job, and it felt great that I was able to get into it, but that was also major motivation to get all the way back to normal, because even though it ‘fit’, it didn’t fit how I am used to! 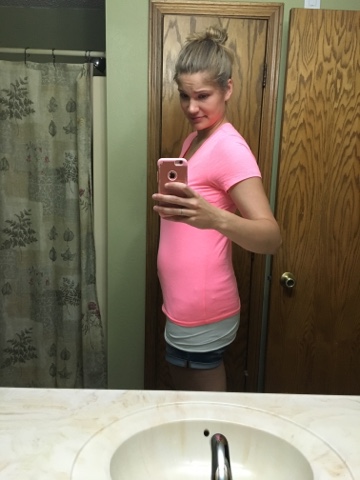 Up 10 pounds. This was the week where I got within 10 pounds of my pre-pregnancy weight, and it felt amazing. Having a goal in the single versus double digits was huge, and really motivated me to keep it up. When I could manage on leave, I would sneak away for runs at the gym. I also went on a 3 mile walk nearly every day! 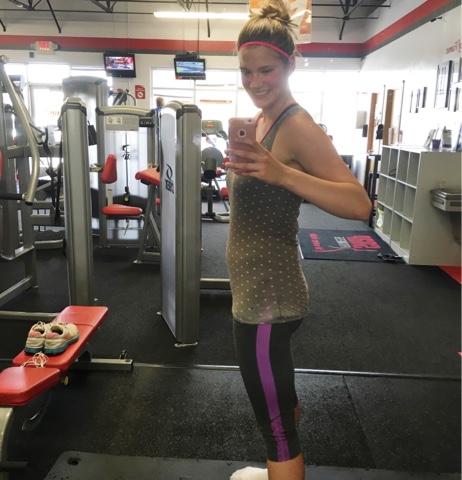 Right after the magical moment the scale was only 9 pounds away from pre-pregnancy weight. I was so happy! 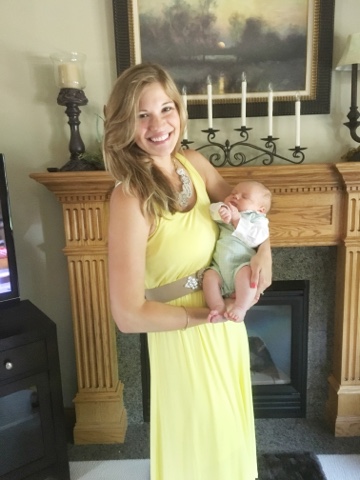 6 weeks postpartum
Up about 7 pounds at my doctors appointment. At my 6 week appointment with Jackson I only had 3 pounds to go, but I also gained 5 or so more pounds this pregnancy so I had to try really hard some days to give myself grace. I had my brother in law’s wedding, at it felt amazing to put on a dress, have my sister do my makeup, and feel pretty. The dress I wore was a jersey material, the prettiest yellow color, and truly the most comfortable dress I have ever worn, and was also SO easy to pull the straps down when I had to run off to the hotel room to pump every few hours. I think it is so important after a baby to dress in what makes you feel good, rather than what you think you ‘should’ be wearing at any given point in time. 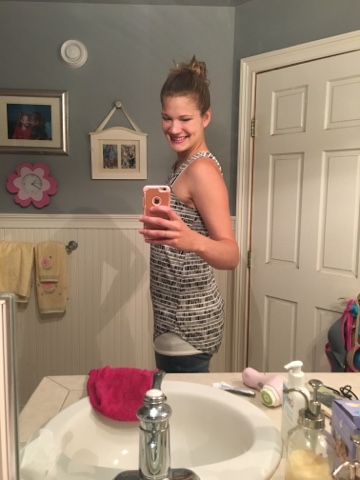 Up 5 pounds. As I remember with Jackson, there seem to be points where you kind of ‘stick’. The weight doesn’t necessarily come off steadily. I sat and sat around 15 pounds above pre-pregnancy weight, and then pretty quickly dropped to 10 pounds. Then, I felt like I sat there for a bit and then dropped to 5 pounds above PPW. This may very well be related to increases in how much baby is eating, as every ounce of breast milk equates to 20 calories burned. So, if baby has a growth spurt and is eating 10 more ounces a day, that’s burning an extra 200 calories a day! My supply really took off around 5-6 weeks too, where to remain comfortable I had to pump twice a day, ON TOP of Lincoln exclusively breastfeeding. 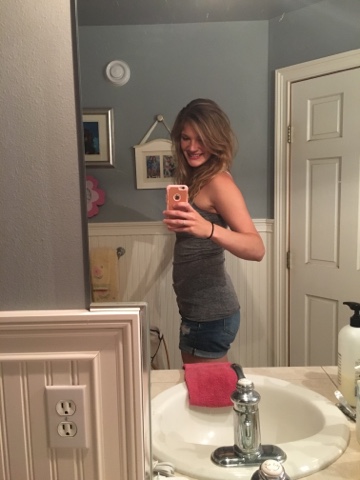 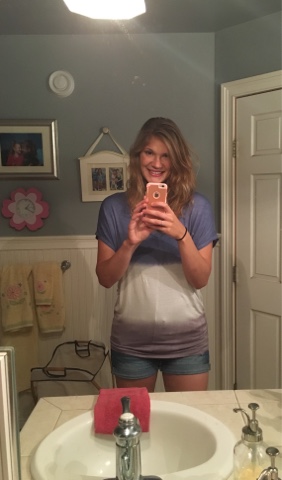 Up 4 pounds. At this point I was happy with every pound of progress even if it was a week at a time! 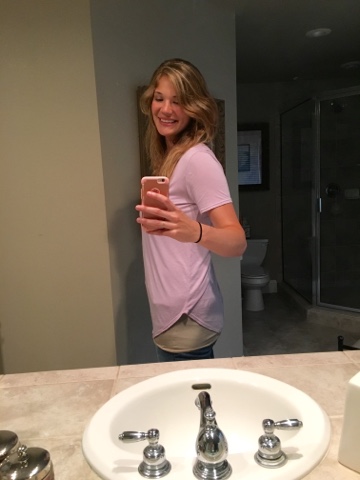 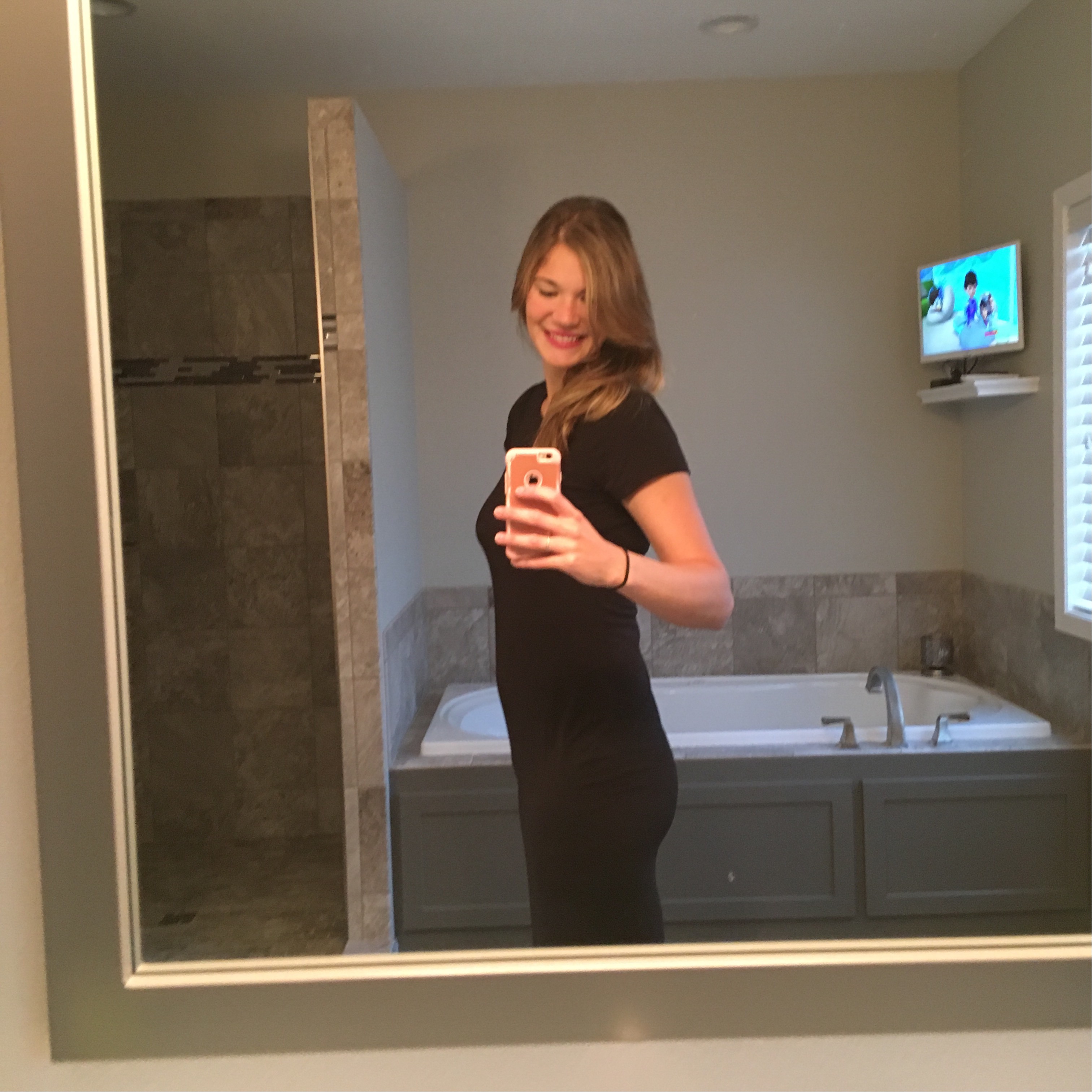 The picture above is at 15 weeks post-partum, and the day I stepped on the scale to finally seeing myself at, and in fact about a pound below my pre-pregnancy weight. I really have sat at that same place since (I am about 19 weeks post-partum now). It took a little bit longer to get there this time, but I did grow am almost 9 pound baby and am amazed at what my body can do!
At this point, I would love to just really get back into shape. The weight comes off, but the toning and endurance don’t happen on their own. One day, soon I hope, I will have a bit more flexibility and independence to sneak to the gym or even do some at home workouts in the garage. At this season in life though, I have a precious and busy toddler and a baby that very much so loves to have my attention, so I am putting my babies first and getting my exercise in the form of walks and wrestling instead of running and weights. It’s a struggle some days, but I am ultimately just thankful for two amazing boys and good health!

Linking up with Our Pretty Little Girls today.