Posted on June 6, 2016
It seems like the more we think time can’t possible go any faster, it does. We are already one month into life with Lincoln, and it has definitely been a change around here. Some days are challenging, but for the most part, having two little men around the house is wonderful. Quite opposite of when his brother was little(see Jackson’s one month post here), Lincoln has a voice, and he will definitely let you know when he is not liking something. Once he gets what he was looking for, though, he is usually quick to return to his calm, sweet self. He is not the most content baby of all time, and I already have a strong gut feeling we will be babyproofing and dealing with mischief much earlier this second time around as parents. It has been amazing to see how, even at a few weeks old, you can really see the differences between your children. Of course, when you have a big brother who steals your pacifier, smacks you on the head, and attacks you with loving but vicious kisses, I would imagine you learn to be tough and resilient pretty quickly! 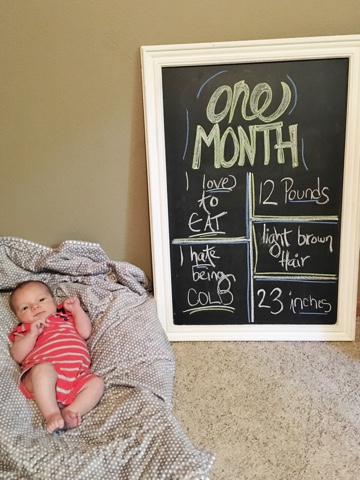 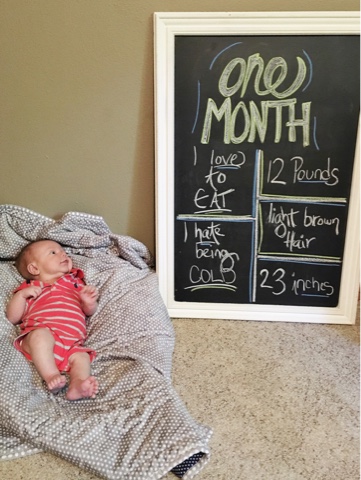 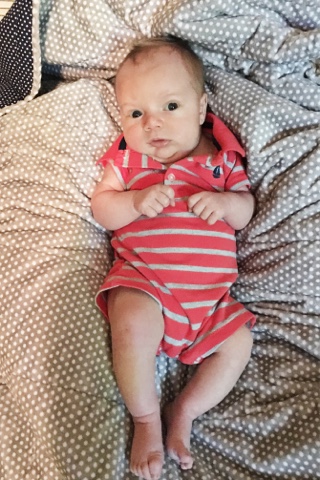 Age: one month
Height: 23 inches
Weight: 12ish pounds. This is from me stepping on the scale with him and then without, but I would say based on the readings he is solidly in the 12 pound range for sure!
Milestones: Staying awake for longer periods of time, making eye contact, and he has rolled over from tummy to back multiple times! Of course he isn’t really doing this intentionally yet, but he is a strong little guy. He is constantly pulling his legs up beneath him during tummy time, and can hold his head up like a champ.
Sleep: He is not too bad in the sleeping department. We get three hour stretches some nights, some nights it is a little less. So far, our best night has been waking up to eat twice around midnight and 3am. Because of our living arrangement, he is in a bassinet in our room and will be until we move in about two months, and it doesn’t take much crying from him to wake Jackson, so as a result Lincoln ends up nursing in bed with both of us falling asleep quite a bit. There are pros and cons to this, but I will say I feel like I am getting more sleep this way than with Jackson, who I always made an effort with to put back in his bassinet after feedings. I think doing things that way resulted in a LOT less sleep!
Best Moment: Seeing him smile! While he hasn’t done it much, we have definitely seen a few real, authentic smiles, and they are just the sweetest. I cannot wait to see more of his gummy grin in the coming weeks.
Worst Moment: Honestly, we haven’t had any terrible moments so far. Jackson is just the sweetest with Lincoln, but during moments of jealousy the poor baby has gotten a smack or two on top of the head. He is a champ at ignoring these attacks though, and usually just goes about his business of eating as if nothing even happened 😉

Health: So far so good! At his two week checkup, everything from his growth to his healing from his circumcision looked great. He is eating, pooping, and doing baby things just like he is supposed to!

Eating: He loves to eat all day, every day! He got the hang of nursing pretty quickly, and this round has been a bit easier than it was with his older brother. Most specifically, his ability to nurse while laying down has been a lifesaver for this mama, because that makes it so much easier to wake up for feedings than when I have been forced to get up and move to a rocker in the past. His weight gain clearly shows he is getting plenty. He had his first bottle about a week ago, and ended up drinking down about 6 ounces like a champ! I was shocked when my mom told me!

Teeth: None, and let’s keep it that way for a while!

Likes: Being held, his pacifier, eating, being warm, looking out the windows, being in motion, his bouncy chair, hanging in the Solly wrap with mom.
Dislikes: Being cold, bathtime, having his diaper changed, driving through roundabouts, when mom stops driving, being taken out of the Solly wrap, loud noises.
Mr. Lincoln, you are just the sweetest, and we are so glad to call you ours. Already it is hard to remember life before you, and we are so very excited to watch you grow!