Talk About It Tuesday [Linkup]

Hello ladies, and happy Tuesday! Jenn and I are back at it for another ‘Talk About It Tuesday’ linkup, and do hope you will join in! 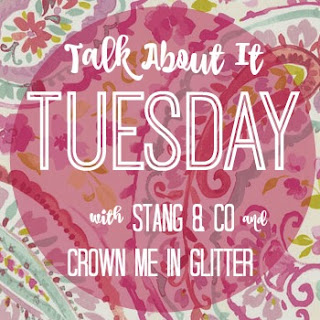 Today, I am simply here for a little rant. I try not to get too carried away with my rants, but sometimes, a lady just needs to complain, right!?

So about six months ago or so, my husband finally upgraded his cell phone. He had a smart phone, but the thing was so old he was still grandfathered in under Verizon’s ‘unlimited’ data plan. I had grown accustomed to my 2GB plan, and really had never had any issues with it. I tap into Wi-Fi all the time, and if I ever approached my limit I just turned off my cellular data until the cycle ended. With Mike’s upgrade, though, he had to change his plan, and we ended up going with a 6GB plan. Nothing to complain about, as our costs actually went down a bit and I mean, if you split it 50/50, I was actually getting more data than I was used to! Except..

My husband actually uses a good chunk of data. He is not in the habit of tapping into Wifi, and it shows when I look at our breakdown of usage. Every single month, he has used more data than me. Not a big deal, because as long as I am not being told I can’t use my phone because of his overuse, what does it matter, right? 😉

Well, last week we got a text saying we had used 90% of our data. This has happened once before, but it has always been at the very end of our cycle. This time was no different, as we had two days remaining on our month. Or so I thought. Somewhere in those two days, one of us (or both of us, who really knows) managed to use up that remaining 10%. At 8pm on Friday, less than four hours before our cycle closed, we both received a text saying we had hit our data max for the month. So, we both immediately put down our phones for the remainder of the evening, and I even went into my settings to turn off my cellular data so I didn’t get charged usage for a random e-mail or something.

Of course, I received our beautiful bill a day or two later, and we were charged $15 for overages, as apparently data was backtracked from earlier in the day Friday, accumulating to a whopping 0.01 GB of data used. They don’t charge for the amount you use once you are on overage, but rather they just charge you for the whole darn extra GB. So, despite not being notified until 8pm on Friday, in those remaining 3.5 hours they went and automatically tacked on an entire additional GB, which in the amount of time we had remaining I don’t know if we could have used up, even if we tried! I hopped on the phone with customer service, and was basically told once a billing cycle has ended there is nothing they can do. I expected this, as customer service for cell use has never been something I have been impressed by, but COME ON! If overage charges are going to be charged, shouldn’t it not kick in until AFTER we are notified? If we both immediately turn off our data once receiving the text, shouldn’t we be in the clear? Nope. I guess not. If it weren’t a minimal $15 I would probably have complained a lot more, but am entirely unimpressed by the fact that I was charged for something, and three hours later I was onto a new cycle and that data I was just forced into purchasing is now obsolete and no longer available for use (because Verizon is cool and doesn’t allow you to carry over unused data).

Long story short, I am watching our data usage way more closely, and my dear husband is going to have to adjust his habits and start using Wifi data at home, or a tablet. And for all that is good and holy, if you get that 90% used notification, just turn the data off. You will be glad you did!

Hope you ladies have things to talk about that are a bit more fun this week, I can’t wait to see what you have to share!