Posted on February 15, 2016
And just like that, it is Monday again. This weekend flew by extra fast, as I actually worked a full day on Friday, which doesn’t happen very often. That extra day, or even half day off, really makes a difference in feeling like you had a long, relaxing weekend! As seems to be the case on these cold, wet winter days, our weekend was pretty low key, but good nonetheless!

Friday, after I got off of work, I headed home and my father in law was frying fish. And so begins Friday dinners for the Lenten season 😉 After eating way more than I needed, we really just threw on our pajamas, lazed on the couch, and watched TV. Jackson has become a fan of crawling onto the couch and sitting in a spot all by himself. We have caught him watching TV like this on numerous occasions in the past week or two. What a little old man. 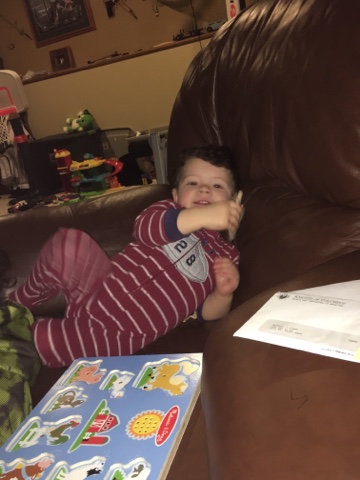 Saturday morning, we were all up bright and early and I was at the gym around 7am. Crawling out of bed is never easy, especially when it is 18 degrees below zero, but it was so nice to enjoy the quiet of the gym and be done with a workout before we even had breakfast! Once I got home, we all got ready, dropped Jackson off at my sister in laws, and Mike and I headed to town to do some bed shopping for Jackson! He is such a terrible sleeper, and likes us to lay next to him, which is obviously a terrible habit, but it is even worse when you are trying to do it in a crib with a guard rail! We walked away empty handed, because we really just can’t decide what the best move is. Since we will be moving to the new house this summer, we can’t decide if it is worth taking down a crib, setting up a new bed, and then determining how long he will actually be in a twin bed before likely getting our queen size bed handed down to him (because mama is getting a king bed once we move, no questions!) Any advice on how to do a smooth transition and what works best?
After we got home, Jackson went down for a nap and I set out to making my annual heart shaped sugar cookies. I made these two years ago to announce we were expecting, and since then just love doing it. I have had some wonky dough recipes, but these seriously turned out perfect, and I will definitely be using this as my default recipe for future sugar cookies! 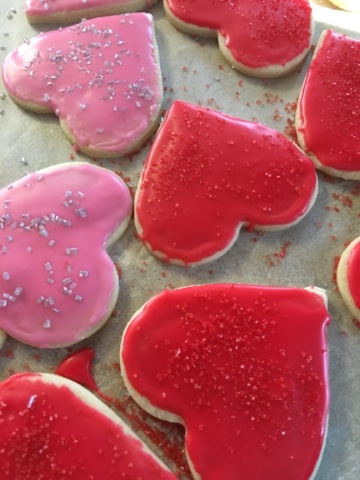 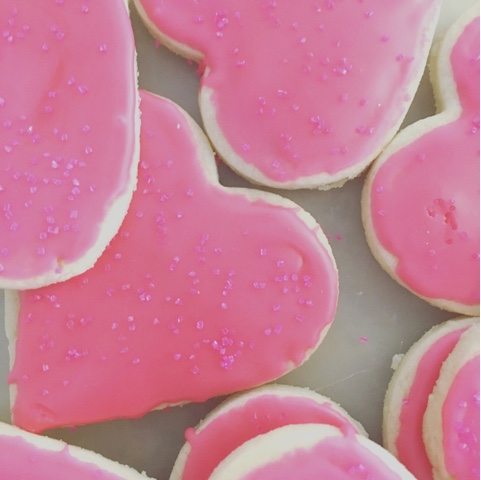 In keeping with tradition, I had to snap a picture of my little man eating a cookie. Look at this picture from this year, and then last year…the cookie looks half as big next to him as it does in the old picture, which reminds me just how big he is growing. Cue the mama tears. 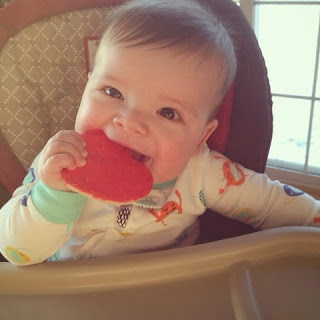 On Saturday night, we had Subway to go for dinner, watched Wallykazam, and went to bed. Jackson has been fighting us terribly with going to bed lately. I am thinking because it has been cold and we have been cooped up, he just isn’t burning off the energy he needs to. Warmer temps this week, so grandma is under instructions to let him run around outside as long as possible so I don’t have to spend an entire hour trying to get him to fall asleep!
Sunday morning, we failed at getting to church,  yet again. Why is it so hard to go in the winter? I keep telling myself as it starts warming up and the idea of going outside isn’t so painful, it will be easier to get out the door. And now to sound like a hypocrite, I realized I had $40 of Kohl’s cash to spend by the beginning of this week, so the little guy and I ran into town, picked up all the onesies we should need to get little brother through the summer, plus a few pairs of shorts for Jackson. And I walked away paying $8.50 out of pocket. I’ll take it! We hit up Target, too, where I scooped up the most darling fedora hat for Jackson in the dollar spot. It was marked as $3, but only rang up as $1! You guys, a one dollar fedora. Best purchase ever. I cannot wait to deck him out again for Easter again this year. And, in keeping with the V-Day spirit, little man rocked his red jeans and love shirt. 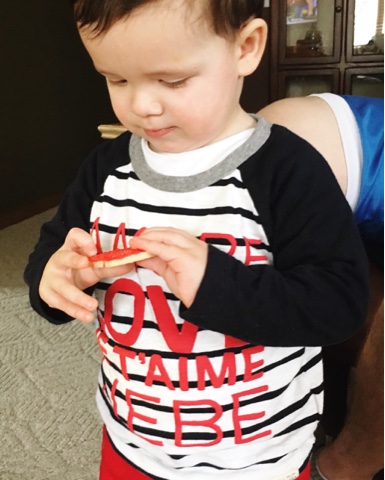 Sunday night, I told Mike all I wanted for Valentine’s Day was takeout pizza, on the couch while watching the Walking Dead, and an ice cream cake. Usually I am perfectly happy to share the table with my in-laws, but there really is something to be said about being cozy on the couch and eating pizza right out of the box. Of course, Jackson spent the entire time trying to grab the pizza, and the pop, and our glasses with pop in them. Stinker. I tried putting him to bed a little early in hopes that he would be down before the new season started, but of course that was no bueno. So, at 8pm he got to come back out in the living room while we watched the Walking Dead. And proceeded to run around making noise the entire time, pressing buttons on controllers, and giving me one more dirty diaper before calling it a night. Next fall for the new season premier, I am seriously sending my kids to a sitter. It’s like they know you want one hour of peace to watch a show, and that is the night they decide to be mosters! All I can say is, at least he is cute. 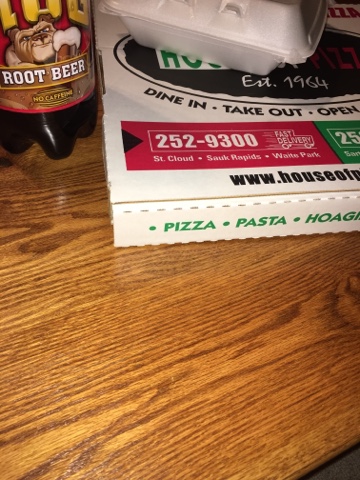 And, in true Michael fashion, my ice cream cake request was filled, with the most perfect Valentine’s Day message from the man who is self-proclaimed anti-Valentine’s Day. He did lie to me about needing to run an errand and called to tell me he had made a special trip to get the cake though. This little cake right here made this mama a happy lady. 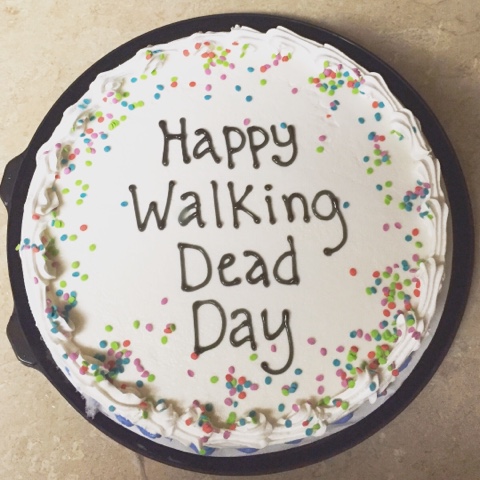 And, to top off a night of terrible sleep with a non-compliant toddler in our bed, I went to start my car this morning to this sitting on my driver’s seat. It’s the little things, guys. 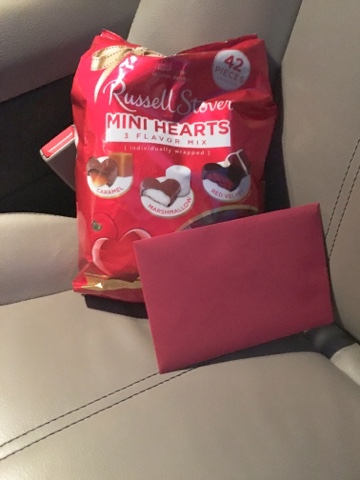 I hope you all had a fantastic weekend! Linking up with Meg and Biana today! 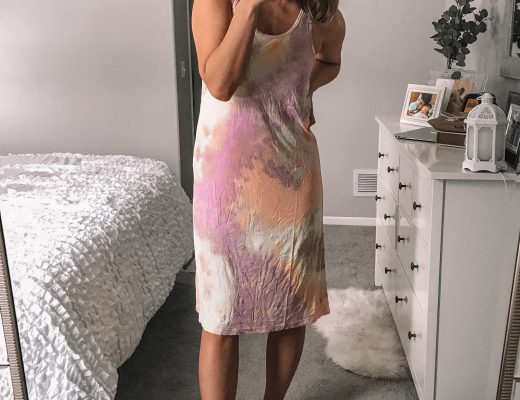