I do not know how it is possible that I blinked and my baby boy is as close to age two as he is to his first birthday. Every month seems to fly by faster and faster, which is why I do everything I can to soak in his snuggles when he demands coming into our bed at two in the morning. My baby is growing so fast, and is more fun to be around every single day. He is truly our sunshine, our greatest entertainer, and an incredible reminder of how blessed we are to call him ours. 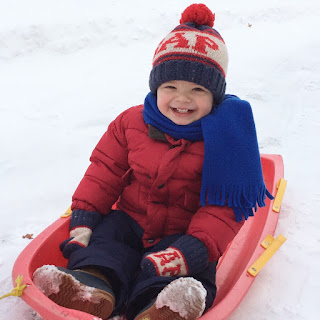 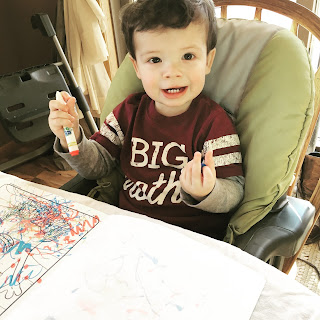 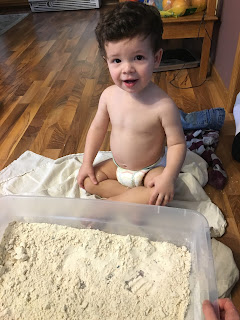 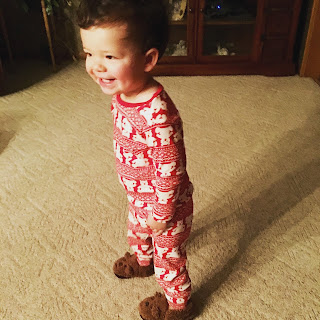 Growth
After realizing we really haven’t measured him since his 15 month checkup (where he was off the charts for height and at the very top for weight) I decided to measure/weigh him this past weekend. Good news, he is still huge. According to the bathroom scale, he weighs 30.5 pounds (98th percentile), and is 36 inches tall, which is literally off the charts. I just saw another blogger post an update on her newly two year old, who at 36 inches came in at the 92nd percentile, if that puts things into perspective at all. He literally shot up overnight, as all of the sudden all of his footie pajamas went from fitting to being stretched to the max. I pretty much had to run to the store this past week for an impromptu shopping trip, because while I usually try to be prepped for the next size of clothing, this time I totally was not. I stocked up on 2T pants, and 3T shirts. Once I put the pants on I realized just how short his other pants had become. Woops. Sorry buddy, you are growing too fast and mommy can’t keep up! 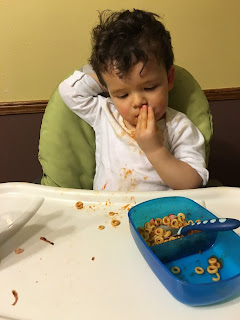 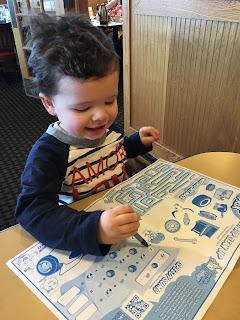 Our sweet boy is a picky eater. And there is really no rhyme or reason to his pickiness. Foods that are always good to go with him include hot dogs, chicken nuggets, string cheese, any kind of dry cereal, halo oranges, strawberries, chocolate chip pancakes, and deli meats.
Foods that have sent him into a fit of rage (we are talking hysterics and tears) include mashed potatoes, bananas, oatmeal, any type of pasta with red sauce, casseroles, and taco meat.
Foods that he has tried and gobbled down, only to refuse days later include red peppers, corn, macaroni and cheese, blackberries, tator tot hotdish, and stir fry. 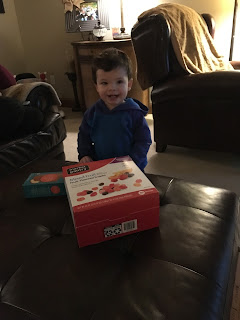 On this particular day, my sweet boy was positive I was going to give him fruit snacks for breakfast.

We decided we were going to start with a bit of tough love in the past few weeks, and he has gotten at least a bit less selective with his eating. He will now at least touch things with red sauce on top, and has finally proven that he is indeed our child with his love of pizza. He also has become a huge fan of cereal with regular or almond milk, particularly cheerios and rice krispies. And, when all else fairs, fruit pouches with veggies snuck in are high on his list of favorites, so I can sneak him a snack and know he is getting more vegetables than he would if I served them straight up. Small steps, but progress. 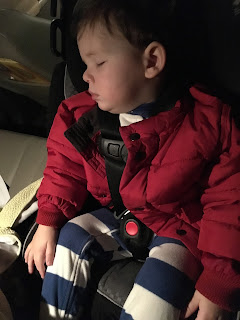 Oh Jackson, my sweet, sweet, Jackson. I love you more than anything, but your sleep habits, I do not. Shortly before moving into the in-law’s house, he went through major sleep regression, and being we were moving and his schedule was going to get messed up anyway, we started bringing him into bed with us. Big mistake, new parents, don’t do this. Just, NO. Here we are, six months later, and I can count on one hand the number of times he has stayed in his bed for the whole night. I will say that most nights, once he is in our bed, he goes right back to sleep and there is little fussing or wanting to play. He is such a restless sleeper though, and his favorite position, unfortunately, is to lay on top of me, or to slowly manage to push me so far to the side that I am halfway off the edge of the bed. Some nights are better than others, but some nights he likes to sleep horizontally and kicks Mike in the head. Needless to say, we need to break this habit. Mike has a week off over the holidays, and we think we might tackle breaking this habit then. But we will see.
In the past few weeks, we have gotten into a bedtime routine that I am loving. We get his milk, go to the rocking chair, and read a couple of books. Once we are through the books, I turn off the lamp, turn him to lay down to finish his milk, and we sing a couple of songs. As soon as he polishes off his bottle, he sits up, turns in towards my chest, and cuddles up under his blanket and is usually asleep within minutes. I know he needs to learn to self soothe, and I know he should be able to fall asleep without being held, but honestly, these moments are my favorite part of the day lately. I know that the cuddles don’t last forever, and holding my sweet boy as I hear his breathing switch over and get heavy once he falls asleep is so special. Why is it after spending hours wishing they would go to sleep so you can have some time to yourself, they fall asleep and you can’t bring yourself to put them down. I wish I could stare at my sweet boy sleeping in my arms forever.

Speech
Our little guy has been a bit delayed in the speech department, so we have been working with him as much as possible on asking for things and communicating. We definitely have always kind of just ‘given’ him whatever he wants, so he really hasn’t needed to vocalize much until recently. He really has come leaps and bounds in the past few weeks though. He is still not saying as many words as he would like, but his interaction has increased so much just in the past week or two. If you ask him a question, he will answer (in grunts and babbles). In fact, his answer to pretty much everything is ‘dad’. While I wish he would say other things, it is also absolutely adorable when you ask him ‘what did you have for dinner’ and he replies ‘dada’. On a funny note, he started staring off into the corner of the room when we are putting him to bed, smiling back at me and saying ‘TED. Dead.’ Creepy? Yes. But I now love to ask him ‘where is Ted’, to which he will always smile and say ‘dead’. Again, totally creepy, but it cracks me up! Aside from mama and dada, he also says ‘DONE’ (often loudly at the dinner table before he has taken a single bite of food), ‘gain’ aka again, and random babbles that I am not sure what they mean, but are definitely ‘new’ sounds and noises he is trying out, which makes me happy.
Again, we continue to work on new works, object identification, and reading books, but for now we are having fun learning to communicate with him and watching him try to tell us stories that we 100% cannot understand.

Habits
There are so many little things that our Jax has picked up on in the last month or so. He started doing a backwards shuffle on his tippy-toes, as well as a tippy-toe side step, and both are almost too cute to handle. Over the holidays, I would play the animated Christmas ornaments and he would screech and giggle and do an excited little dance. Again, too cute to handle. He has started throwing tantrums a bit more, but nothing too obnoxious yet. He has mastered his ‘fake laugh’, and it is the cheesiest thing you ever did hear. Running across the couch is a favorite activity as of lately, despite everyone’s efforts to immediately make him stop. He has mastered turning the dishwasher on and off, and also knows which button on the remote control turns off the TV. Talking to Siri on our iPhones will have him laughing harder than just about anything, as will watching videos of himself laughing. I think we just might need to cut back the technology around him, because he is obsessed with pressing any kind of button he can get his little hands on. His absolute favorite show is still Wallykazam, and he will sit and watch entire episodes beginning to end without moving a muscle. He also likes Bubble Guppies, Little Einsteins, and the baby channel, but nothing comes close to Wally. He loves to put legos together and take them apart, and gets pretty darn upset when two are stuck together that he wants separated. 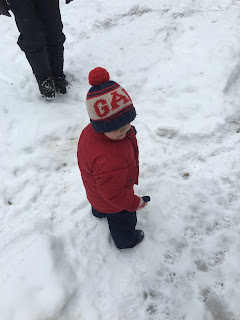 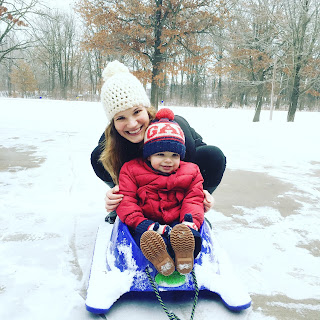 After hating his new snow boots with a passion, he figured out that putting them on means he gets to go outside, and since then he has never looked back. He loves playing in the snow, hearing it crunch beneath his feet, and getting pulled in the sled or pushed down the hill. I am so happy it is February and we are approaching at least SOME warmer days, meaning going on walks and getting outside more often, because truly nothing makes him happier.
Another new favorite activity is coloring, and he only tries to eat the crayons and markers half of the time. If he is being restless, clingy, or just seems bored, putting him at the table and giving him a coloring book usually does the trick. It is so much fun to watch him begin to do activities that work on his fine motor skills and allow him to start expressing himself.
He loves to drop what he is doing, run across the room, and give the biggest, sweetest hugs. There is never any doubt whether or not Jackson is happy to see you, and it makes me so happy to have such a fun, loving little boy who adores his mom and dad so much. Everyone that meets him comments on how he never stops smiling, and it really is true. He is such a happy little guy, and his smiles and laughs will melt your heart.

Truly, his personality has just exploded recently, and I want to remember all of these precious things that he does. The hours are long, but the days are short, and as soon as he begins doing something new, he stops doing something else. Every stage is so special, and I continue to be humbled every day that we have the honor of calling Jackson ours. To the moon and back, we love you Jax Attack!