Halloween Weekend; Elvis and a haircut!

Posted on November 2, 2015
Can I start off this post by saying that gaining an hour of sleep when daylights saving ends really isn’t all it’s cracked up to be? Someone was up and at em at 5am in our house today, and then getting the sleepy crabbies before mom had even left for work. Happy Monday everyone! On a happier note, this weekend was a lot of fun and we had a blast getting our little guy dressed up for his ‘second’ official Halloween!
Linking up with Meg, Biana, and Ashley today!
Friday night, we didn’t do much of anything. We had a lazy night at home, watched TV, and were in bed early. I am finding this to be the sad real life of parents of toddlers. Weekends aren’t for staying up late, because they also are no longer for sleeping in 😉
Saturday, we were out the door bright and early to hit up Target for a baby shower gift, of course not without swinging through Starbucks first. We went to the baby shower late morning, and mingled and enjoyed the delicious food. Of course, Jackson wasn’t having any of it, and also decided to pee straight through not only his onesie and shirt, but also straight through his jeans! And which mom didn’t pack spare pants? This one! Fortunately, it was at the neighbor’s house, so I ditched the baby with grandma for a few minutes and made a dash for fresh clothes. After the baby shower, we went home, ate lunch, and dealt with a very crabby little boy who took much too short of a nap! We are talking whiny, crying, crawling up your legs nonstop attitude. Rough on baby, AND mama.
Finally I told Mike we need to dress him up and leave NOW, because he is getting worse by the minute. So, on the costume went, and Elvis (and his bottle of milk) entered the building. Mike’s mom helped me make this costume, and we were just thrilled with how it turned out. A lot of work went into this (because obviously an Elvis costume pattern doesn’t exist this year) so we did a lot of improvising and Pinterest inspiring and below was the end result! 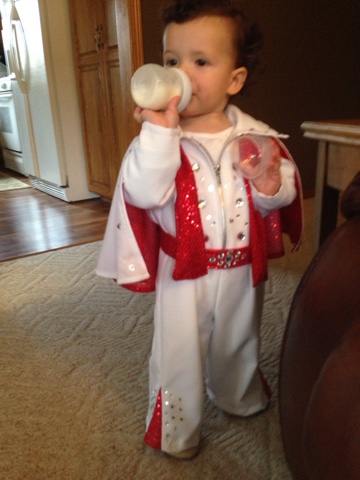 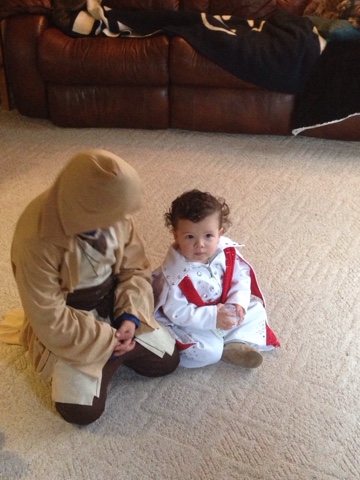 Cousin Logan was Luke Skywalker, and we spent a ridiculous amount of time trying to get a decent picture of a non compliant baby. 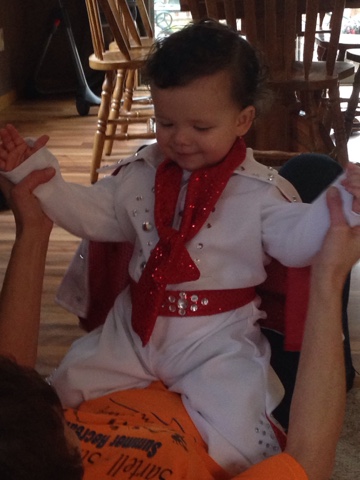 He did manage a few smiles for grandma playing pat-a-cake! 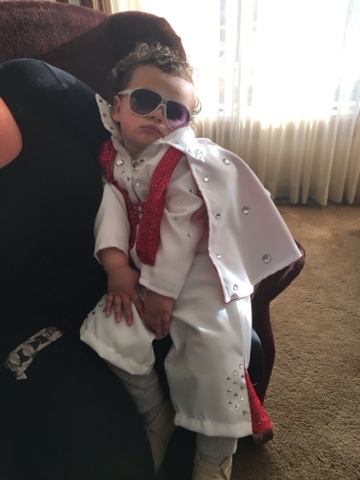 And of course, on cue, little man crashed about two minutes before pulling into his great-grandparents driveway. If only he knew that fighting sleep isn’t better than actually sleeping. 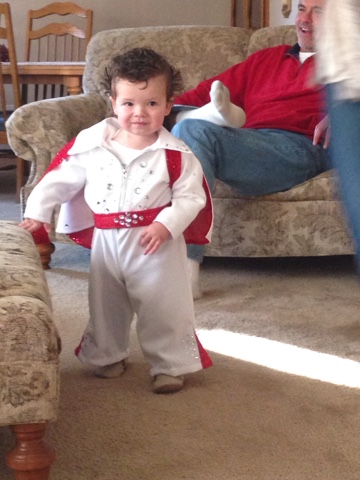 After a quick power nap, he was up and ready to run around a new house and explore. Look at that little face! Kid knows how to pose. 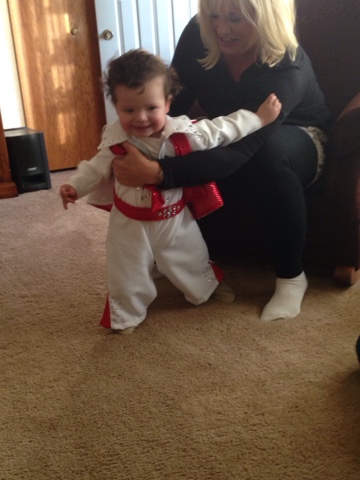 There was way too much excitement to sit still long enough for a picture with grandma.
After the great-grandparent visit, we decided to swing by our dear friends Bret and Cari’s new house to visit. Below is the best picture I could get of father and son. Don’t let the power nap fool you, the kid was still exhausted. 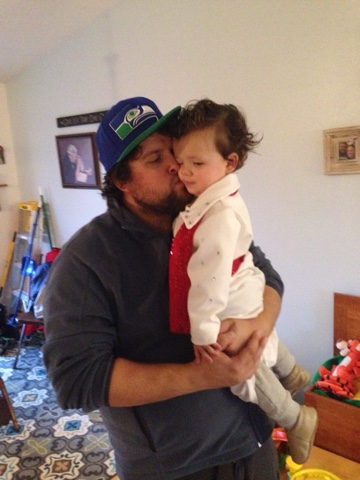 Bret and Cari have a little boy who is almost exactly a year older than Jackson, who was born at only 24 weeks. Little Daniel is a fighter and an absolute miracle. He still has medical needs, and as he is pretty susceptible to infections and such doesn’t have visitors terribly often, and so this was the first time our sweet boys ever met. Daniel was so excited when we came in, and was blowing kisses to Jackson. It was the absolute sweetest. 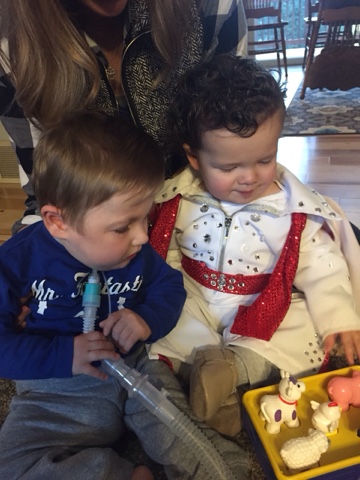 While the picture below shows Jackson lovingly looking at Daniel, don’t be fooled. I am 99% positive this was seconds before Jax tried to shove him out of the way because he didn’t want to share the toy. Sigh. We are learning. *only child problems* 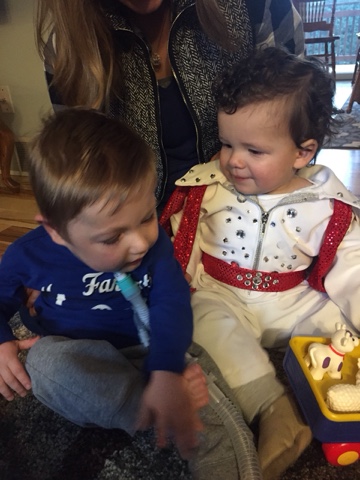 After hanging out with his newest buddy, we packed up for one more stop at my parents house to get Jackson’s ‘treat bag’ and feed him dinner. We didn’t manage to go door to door at all. It really is tricky to maneuver everything around naps and dinner schedules, and I just wasn’t willing to deal with a cranky, crying baby who is hungry for the sake of a few pictures and the ‘experience’. Next year, you best believe I will be teaching him about -trick-or-treat- and how to solicit free candy. 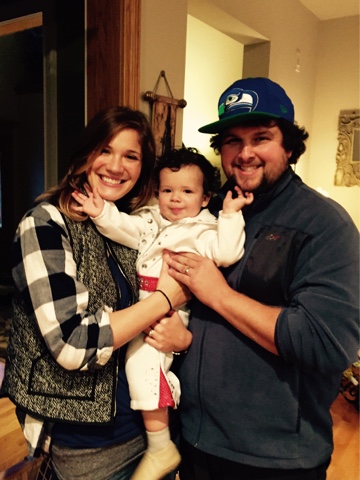 Our only family picture with all of us looking. Little man wasn’t feeling the camera. After feeding Jackson, he was a whole new baby and enjoyed running around grandma’s house in nothing but a diaper. Kid loves his freedom, and being naked. That is high on his list of favorites. The rest of us ordered pizza and were lazy on the couch watching Hocus Pocus. It was the perfect way to end our Halloween evening.
Sunday, despite the clocks setting back, we did manage to sleep until 6am (or 7am, according to Jackson time). Hey it could be worse (fast forward to our 5am wake up call Monday morning..) I was able to sneak away to the gym in the morning, grabbed some groceries all by my own (mom vacation?) and made it home to take the little guy on a walk. The weather yesterday was beautiful during the late morning, so we soaked it up. He crashed on the walk, and took a nice long nap. The rest of the afternoon was spent playing with toys, hanging out with aunts and uncles and cousins who stopped over, and getting a hair cut. After holding out so he could rock his hair with his ‘Elvis costume’, we agreed November 1st was the due date for a haircut. Once again, I impressed myself with a not half bad hairdo for the little man. Isn’t he so handsome, and so grown up!? 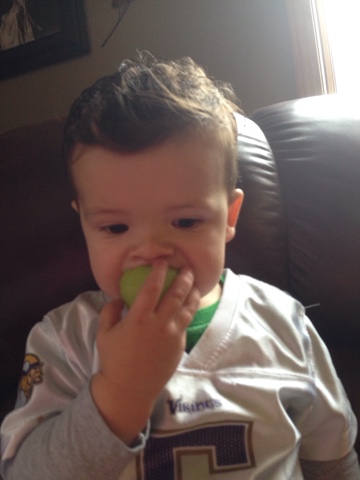 We capped off the evening with a fish fry with all of Mike’s siblings who came over, and I crashed ten minutes into The Walking Dead (darn you, daylights savings)! Fortunately, I hear I didn’t miss too terribly much. Here’s to wishing everyone a happy week and a quick descent to another weekend! Only 4 days until Friday!! 😉 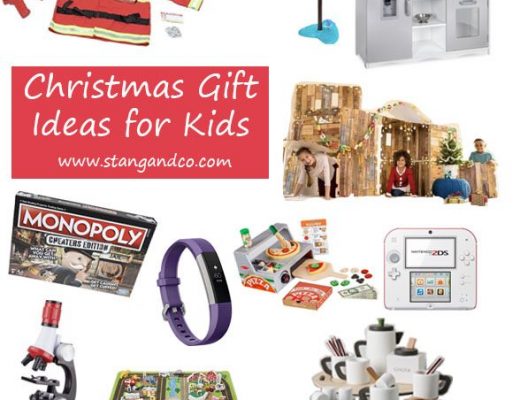