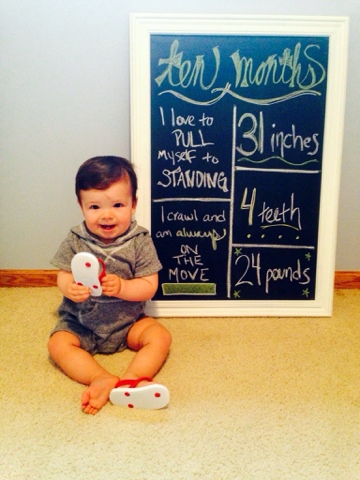 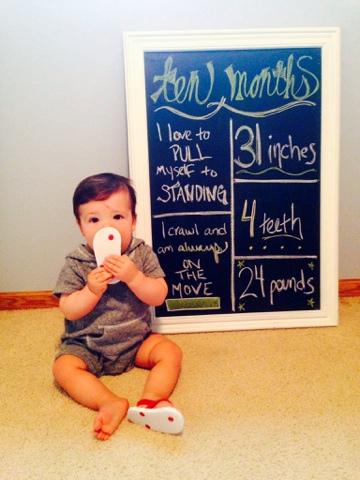 Age: 10 months
Height: 31 inches
Weight: 24 pounds.
Milestones: He crawled the day after he turned 9 months, probably because he didn’t want me to post about it on my last monthly update! Within days of crawling, he was pulling himself to standing, and now he stands anywhere, anytime, as long as he has something to pull himself up on. Unfortunately, this usually means the couch and the coffee table (which I should point out is NOT baby safe). He also loves to stand and then chew on the edge of the table or couch, which is both icky and scary, because he falls so often we are terrified he is going to break his teeth!
He literally busts his little booty down the hallway so quickly now, he is hard to escape. He loves to join me in the bathroom (no matter WHAT I am doing), crawl into the bedroom to play with anything he can find on the floor, and stand at the top of the stairs and beg for attention over his baby gate. We can’t let him out of our sight, and it is fantastic and terrible all at once. I have been feeling pretty nostalgic for the days when he was a ‘blob’ that couldn’t crawl, stand, or even roll. Long gone are the days of turning my back and finding him exactly where I left him. Kid dynamite is a mover and a shaker, and we can barely keep up! 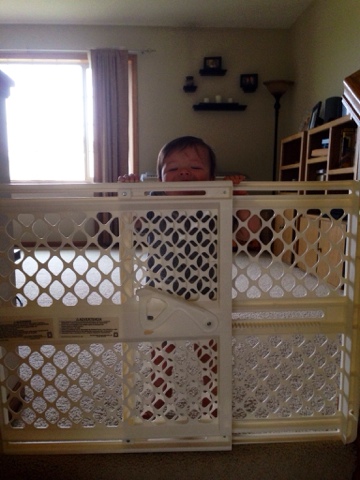 Sleep: OMG. I just want to cry thinking about it. He has turned into an absolutely terrible sleeper and ends up in our bed at least every other night lately. Due to our ‘worst moment’, we have decided it might be time to do some crying it out. Now that he can stand, it is heartbreaking to walk into his room and see him up in his crib, looking like he is in jail and just so, so sad. He has to learn to put himself to sleep, though. I’m hoping we are able to stick to our guns and break these bad habits this month. 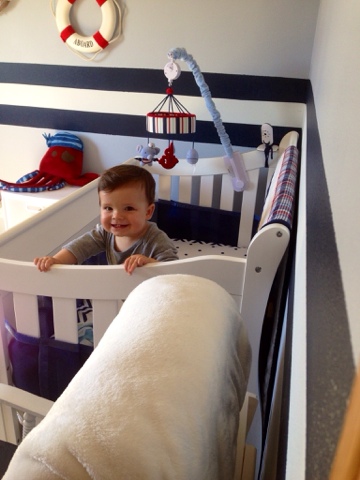 Best Moment: I took him to the mall to get out of the house once he was feeling a bit better last weekend, and bought a coffee and cookie for myself. I decided to share (the cookie, not the coffee, what kind of mother do you think I am?) and he was just loving it. He had his foot propped up on the front of his cart, and I kept pretending to sniff his feet, which for whatever reason he has always found hilarious. Between bites of cookies, he kept letting out the sweetest little giggles and the biggest smiles. It was one of those random moments that is almost too much to handle, and you realize your love for your little person cannot be described or contained. This little boy has my whole heart.
Worst Moment: Well, he may have been in our bed because he was once again acting like a party monster at 2am, and around 4am there was a THUMP and no baby to be found in my bed. He promptly started crying, but I was able to nurse and snuggle him back to sleep. He escaped injury free, almost..I would deem this his first battle wound. 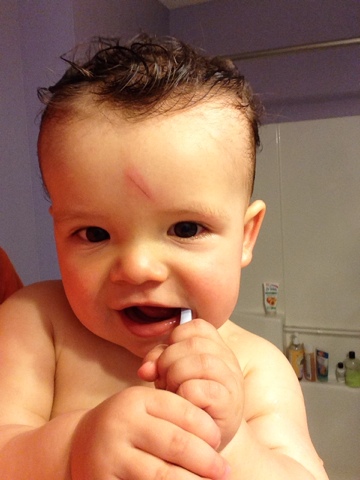 Health: I came down with a cold this past week, which meant that so did daddy and baby. He has a very runny nose and some congestion, and he is finally getting over it. This has affected his appetite a bit; I can’t blame him, trying to eat with a stuffy nose is hard work!

Eating: About 75% table foods at this point. We still do fruit and oatmeal for breakfast, but besides that we eat a ton of berries, mandarins, string cheese, chicken nuggets, hotdishes, avocados, greek yogurt, and the list goes on.

Teeth: 4.5. I can say this because he has both top and bottom teeth, and his top left tooth is so close to popping through that it LOOKS like he has another tooth. It isn’t able to tear apart the leather on the furniture just yet, but that baby is there. 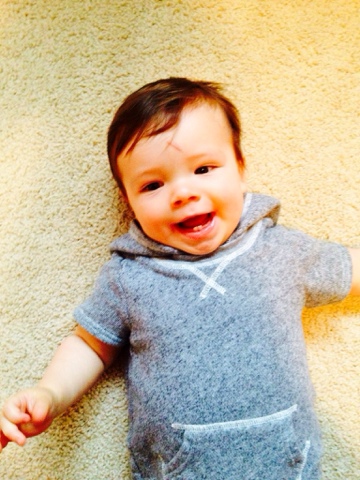 We are having so much fun watching our baby turn into a little boy. He is just the sweetest, silliest, full of personality child, whose newest favorite thing is sitting by himself and laughing hysterically at who knows what. We love you little man!