It is finally time to bust out the shorts and swimsuits for the season, and the timing really couldn’t be more perfect. The littlest person in our house is getting busy and isn’t content if he isn’t moving, and sunshine, walks, and pool time are very welcome in our future! 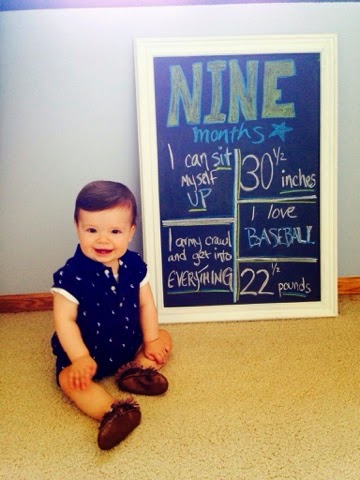 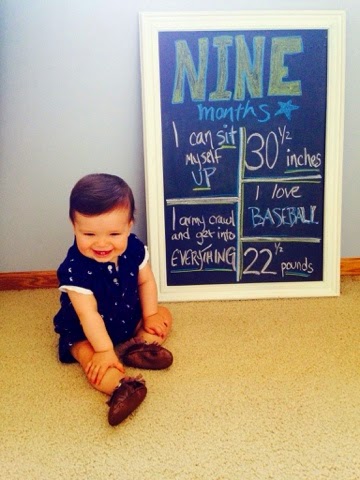 Age: 9 months
Height: 30.5 inches. Officially hanging out at the 100th percentile. A tall kid, from me? No way!
Weight: 22.5 pounds. 85th percentile. He lost half a pound this month, I guess that’s what all that movin and shakin does to a baby..it certainly isn’t due to shortage of food. 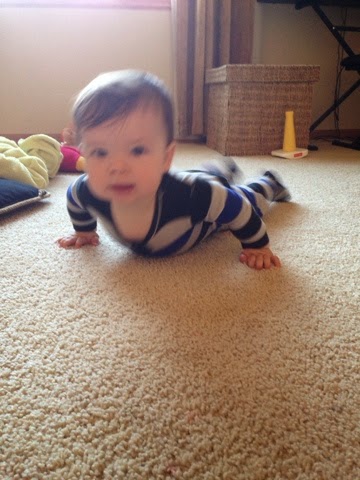 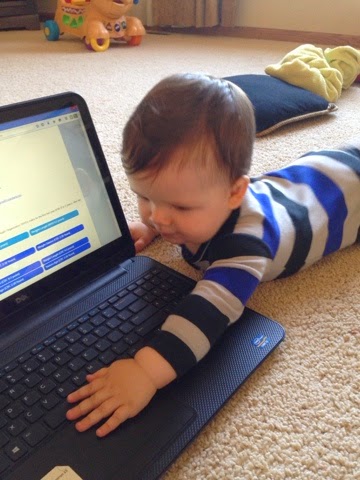 Milestones: Not crawling. Well, not in the traditional sense, at least. He army crawls like no-ones business. Note the picture above which happens every. single. time. I try to lay on the floor with my computer. He takes it as an open invitation to drag himself across the room to come and bang on my keyboard and destroy whatever task I was currently working on.

We also had an isolated incident of pulling himself to standing, so we know he CAN do it.
Another milestone is that he has started sleeping on his stomach at night. For nearly a month, we were up many times a night because the little guy would roll over, wake up, and freak out not knowing why he was in his crib or on his belly. He has finally started to roll over and stay asleep, which means the return of a normal sleep schedule for all.

He has also learned how to go from his belly, to his back, to sitting upright, to back to his belly, and do it all over again. It is pretty strange to lay your baby down and look back a minute later and have to question yourself asking..’did I set him down? I swear I laid him on his belly?..’ Nothing beats the look on his face when he knew he did something like a ‘big boy’.

Sleep: who took my sweet baby who sleeps through the night and replaced him with this monster!? Seriously, the past few weeks we have been up at least once a night almost every single night. And he wants to eat which is a whole other problem. The last few days we finally saw some improvement (see milestones above), and are hoping this trend of getting back on track continues. Otherwise, poor Mike is going to have to put up with waking up to Jackson punching him in the head (because what baby can sleep when he has mom and dad’s bed to play in!?) 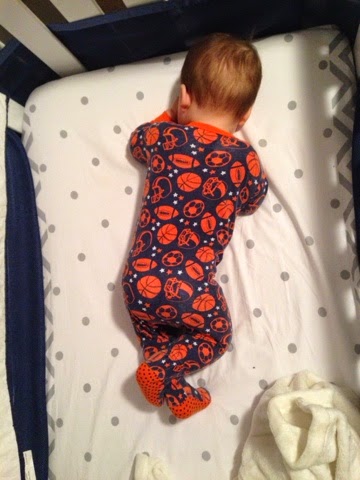 Best Moment: When he pulled himself to standing! We had the little guy sitting in a storage container (his ‘punishment/containment’ after trying to eat action figures repeatedly) and he was happy as can be in his little box. All of the sudden, he grabbed the front end, and with hulk-like power slowly rose to his feet. He then proceeded to stand there, looking both amazed and terrified, and we spent the next ten minutes trying to get him to repeat for a picture. Of course, he did not comply and we are waiting for him to show off his standing skills again. We operate on Jackson time, and the little stinker knows it! 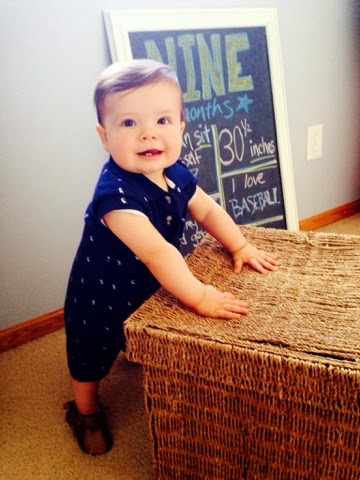 Worst Moment: On an eventful Friday evening after a week of me having the flu and a crazy amount of homework, we decided to live on the edge and drive into town to get a buy one get one free dinner from Leeann Chin. I know, too much excitement to handle. Anyway, on the drive home Jackson woke up and was hungry and just not feeling the outing anymore, so he started to cry. We tried giving him toys, talking to him, and reassuring we were almost home, but he continued to get more and more mad. He was also dealing with a teeny little cold, and that combined with his meltdown led to a lot of gunk building up in his throat and none of it getting out with him gasping for air between each sob. We were about two minutes from home when Mike and I looked at each other and said ‘he doesn’t sound like he is breathing’. We pulled over and Mike hopped in back to find a purple faced baby, and upon pulling him out of his car seat he threw up everything ex had been choking on. Our baby literally was choking on his own tears and mucus. It was the saddest and scariest moment we have had to date, if we had let him ‘just cry’ the two more minutes the our house we really don’t know what would have happened. And now we are terrified to let him cry..not a fun experience at all.

Health: All the same. A teeny little cold for a few days, but that’s it.

Eating: We have made the move to almost all table foods. We are using up what is left of his baby food, and he still allows us to feed him, but much prefers feeding himself. We do lots and lots of fresh fruit, mac and cheese, potatoes, string cheese (kid goes wild for string cheese), and we just started doing canned/frozen vegetables, trying out peas and carrots last night which he devoured, which surprised me because pureed peas were NOT his thing.

Teeth: 3, he just got one of his top teeth! The other one hasn’t broken through, but it looks like it is pretty close. We definitely knew more were coming, because our little guy had basically given up the drooling until the last week or so, and now he is slobbering on everything. We are actually kind of excited though, because teeth on the top and bottom means eating will be much easier and we can start trying more things out!

I have spent a lot of time lately reflecting to last year at this time, or more specifically last summer right after Jax was born. I put him in his romper for this month’s picture and thought back to his little newborn size romper he wore to the baby shower last year and cannot believe he actually fit into it, when today we would barely be able to fit one of his chunky thighs into it. I was singing him his song this week and about lost it with tears in my eyes, reflecting back on the newborn I used to sing it to, and how this adorable 9 month old smiling back at me couldn’t possibly be the same little boy. My heart is literally broken when those moments happen where you realize just how fast time goes, and yet I am so in love with who my baby is today that I don’t know if I would want to make him ‘little’ again. 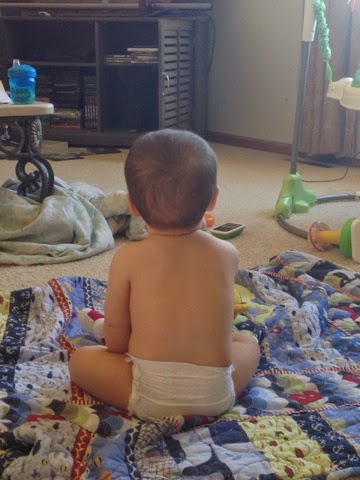 To watch him develop a personality, and catch the back of his little head as he babbles ‘gaga go dada whoa *shriek/squeal/giggle* ohh baba’ (this is a literal translation to his current vocabulary, by the way) while watching TV is one of my favorite things ever. I catch myself peeking at him around the corner to watch him play by himself, when he has no idea anyone is looking. He is becoming his own little person, but I am so, so blessed to be a part of his fun little world. We love you so much, Jax Attack!