Really. REALLY? I swear I just wrote the 7 month post last week. Time is going by so fast lately, some days I can barely keep up. With the changing times comes a changing baby, and he keeps on learning new tricks and adorable things every day. 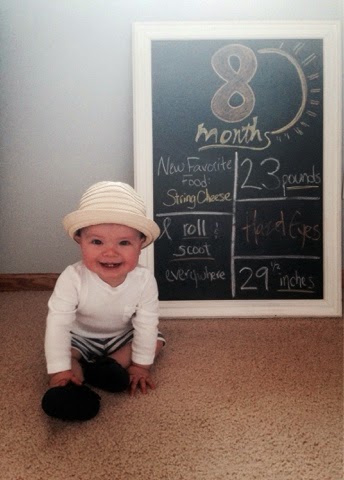 Can we just talk about his outfit for a second. I about died when I saw this hat, practically a steal at target, and his moccs are a fabulous and affordable alternative to some more expensive brands, perfect for quickly growing and changing feet. The little girl styles KILL me, too bad I just couldn’t justify the pink and gold polka dots for my boy 😉 This little man just kills me, he looks ready to hang on the beach with Jason Mraz, am I right!? A hipster at 8 months, no big deal. 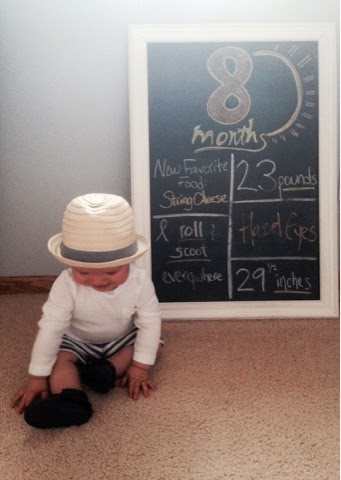 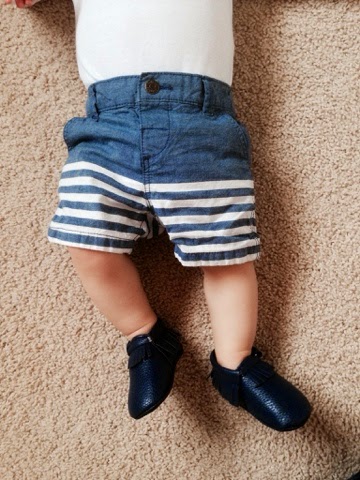 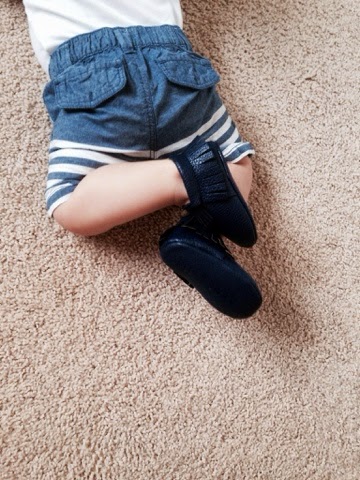 Age: 8 months
Height: 29.5 inches. 98th percentile, no big deal.
Weight: 23 pounds. 96th percentile. I’m gonna have some killer biceps from hauling this kid around.
Milestones: Still not crawling. However, for being immobile he has this incredible ability to somehow end up on the opposite side of the room facing the opposite direction in a matter of seconds. Just because your baby doesn’t crawl doesn’t mean you can leave the room, I have learned. I have popped into the bathroom to brush my teeth with Jackson laying on his belly by the couch, and have emerged a minute later to Jackson laying by the window chewing on a tablet charger. So there’s that.
For not crawling, he still loves working out his little muscle man legs. We have started practicing ‘standing’, and we can let go and he holds himself up for a few seconds. Strength isn’t an issue at all, just gotta work on that balance. Jackson is going to be a master at trust falls, I think!
Sleep: The same. I mean, I can safely say we have a baby that sleeps through the night, but the random bad nights still happen. It tends to happen on weekends, too. So maybe it is my fault because he gets thrown off of his ‘schedule’ because mama is too busy playing to give him naps when she should…
Best Moment: Baby boy has started cuddling! Let me explain. The kid has always liked being held, but I would say he took the love and never gave much in return. The last few weeks, though, we are talking head on the shoulder, face burying in the chest, sweet cuddles. It isn’t just when he is falling asleep either. Baby boy will be wide awake and just take a break for the activity to rest his head on my shoulder and babble some baby talk. Definitely my new favorite thing.
Worst Moment: Nothing really sticks out this month. So as always I will say sleep and reflect back on last weekend where I was hanging out on the couch at 2am with a chatty little boy who wanted to blow spit bubbles and touch my face repeatedly. I love you buddy, but no.
Health: All the same. We are nearing the end of flu season and say we had it pretty easy this year.
Eating: Loves fruit. Loves pizza. Not too sure about baby food with chunks of noodle in it (let’s just swallow the sauce and let the noodles collect on our tongue). Gets distracted easily and will look at or focus on just about anything rather than taking the bite I am trying to shove in his mouth. Obsessed with string cheese. Enjoys teething biscuits for dessert which he crunch crunch crunches with his little teeth. Cutest sound ever.

Teeth: Still just rocking the bottom set. I’m a little scared for the top two to break through, I don’t know if I can handle a teething baby right now, I hear those top two are not easy on baby!

Another interesting little bit about our guys is his eye color. They were so dark early on we had everyone guessing they would be DARK brown. Well, those babies are dark, but they have so many speckles of blue, green, and who even knows what other colors, I am going to go ahead and say that they are without a doubt hazel. They are so so dark though, sometimes I would almost describe them as grey. You need to be careful looking into them, there is so much going on you just might get lost.
I have to say Jax’s little personality has exploded in the past month. He makes the most hysterical ‘cheese’ smile, loves to babble and make growly noises, begs for us to share our dinner with him, and has giggle fits when we play peek a boo around the corner. I know he is approaching the age where he is really going to change so much and become so much more independent, so we are soaking up every moment of our squishy little baby that we can!