Wait, what!? Our cool little man is three months old. Actually, he was three months on Monday. I’m late on this, don’t judge. Going back to work is time consuming, and every afternoon this week was spent snuggling the little guy!
The changes between two and three months have been so drastic and fun to watch, his personality is growing every day and, as sad as it makes me to pack away 0-3 month clothes and have a baby that prefers to stand on his little legs than be cuddled (not all the time; this guy still loves cuddling his mama 90% of the day), for crying out loud, I am watching a little person that I created figure out the world. How can I be sad about that!? 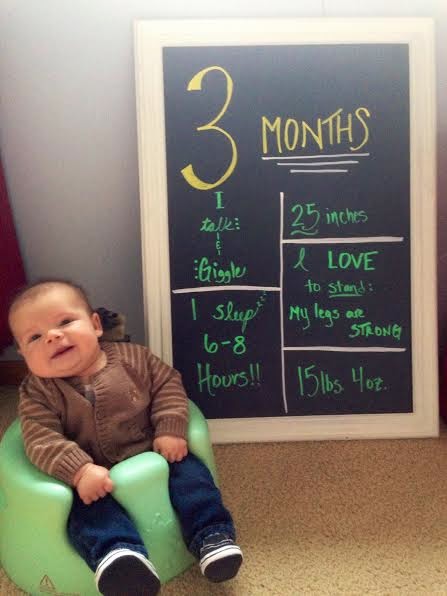 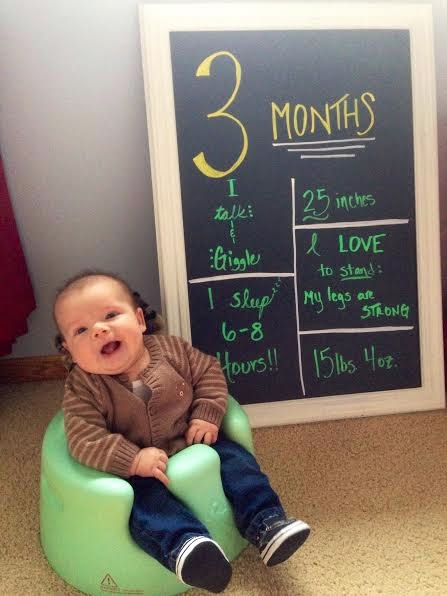 Weight: Just over 15 pounds! This kid is a chunky monkey. I think I may have a linebacker on my hands!
Milestones: I swear he is doing something new every day! He rolls from tummy to back, loves to ‘stand’ and stretch out his legs, and tries to mimic the sounds and noises that we make. Oh and those baby giggles. When that little guy smiles at me, this mamas heart almost explodes.
Sleep: we still have the occasional up twice a night, but he has started being pretty consistent and is sleeping 6-8 hour stretches! 8pm-3am/4am is becoming normal, and I love it. Of course, he is usually up and ready to play after his 4am breakfast. Overall though, we have come leaps and bounds with sleep. I feel almost like a real, adequately rested person again!
Best Moment: The other day, I was getting ready for work and heard Jackson start to fuss. Of course my first thought is ‘child you ate an hour ago…’ Followed by ‘great I’m going to be late for work’. I went into turbo speed getting ready, hoping he would stay content just long enough for me to finish what I was doing, when I realized he wasn’t fussing in there, he was babbling to himself, which became evident when he let out an obnoxious laugh(he must think his own jokes are funny). He is just the sweetest baby, every moment is the best.
Worst Moment: doctors appointment. Needle. Screaming baby. I’m thinking this will probably be a trend of worst moments..kid does not like being poked!
Health: he is doing great. Getting chunkier by the minute, eats well, sleeping better, and fusses very little (mostly only when he wants some mama snuggles so I can’t complain).
Eating: still eating plenty (obviously) but getting on a schedule of when he eats and how much, which is nice. I am of course waiting for the doctors word, but I am soooo anxious to try out rice cereal for the first time, I’m pretty sure Jackson will think he has won the lottery!
Teeth: None. We want to breastfeed for quite a while still, so I’m hoping for a few more months teeth free 😉
I have to say that as he has grown, he has become more work. While round the clock feeding has ended(whats that, you say. The kid is one a semi-sorta-kinda SCHEDULE??!), awake time has increased, as has the demand for constant attention. When he was first born, I would take him on a run, come home and pop him in his swing and be able to sneak in a quick shower, and get out to a still peacefully sleeping baby. Now I have a precious peanut who loves his mama, and HATES when his mama is not loving on him every waking minute. Cooking meals: struggle. Showering: struggle. Crocheting(mynew favorite hobby!): struggle. Ok, this one is doable, it just requires crocheting around a baby head and taking breaks every .9274 seconds to return to Jackson his precious nuk that he just spit out for the 50th time.
While the house may be dirty, the dishes piled high, and the clothes unfolded, I wouldn’t trade a minute of the baby snuggles and smiles. This little guy loves to have casual chats on the couch. Yesterday, our conversation went something like this:
Me: nanananana a.
Jackson: ooooooo *smile*
Me: doopadoopadoop
Jackson: AHHHH! *giggle*
Me: gagagaga (basically, I sound like Popeye when I do this one)
Jackson: GEEEE *gurgle, spit, smile, drool*
I can honestly say he is my favorite person to talk to. He gets me, and I get a kick out of watching him just be. Sometimes I think my heart might actually explode he makes me so happy. While knowing he will only be little like this for a short time makes me sad, looking forward to our soon to come milestones like sitting up, trying food for the first time(ok maybe 3rd time, one time mike had to share his sucker and one time I may have let someone taste a popsicle), and really starting to talk and interact is enough to make me practically skip with excitement. Watching your child go from nothing but a eating, pooping machine to a little person who tries to mimic and share his innermost thoughts(in baby language, of course), is just magic. And a miracle. Simply amazing.