Somehow another month has escaped us! Our little man has changed SO much in the past month, it seems unreal. He seemed so tiny when he was born 4 weeks early, but eating and growing are skills he had clearly mastered, and he is tiny no more! 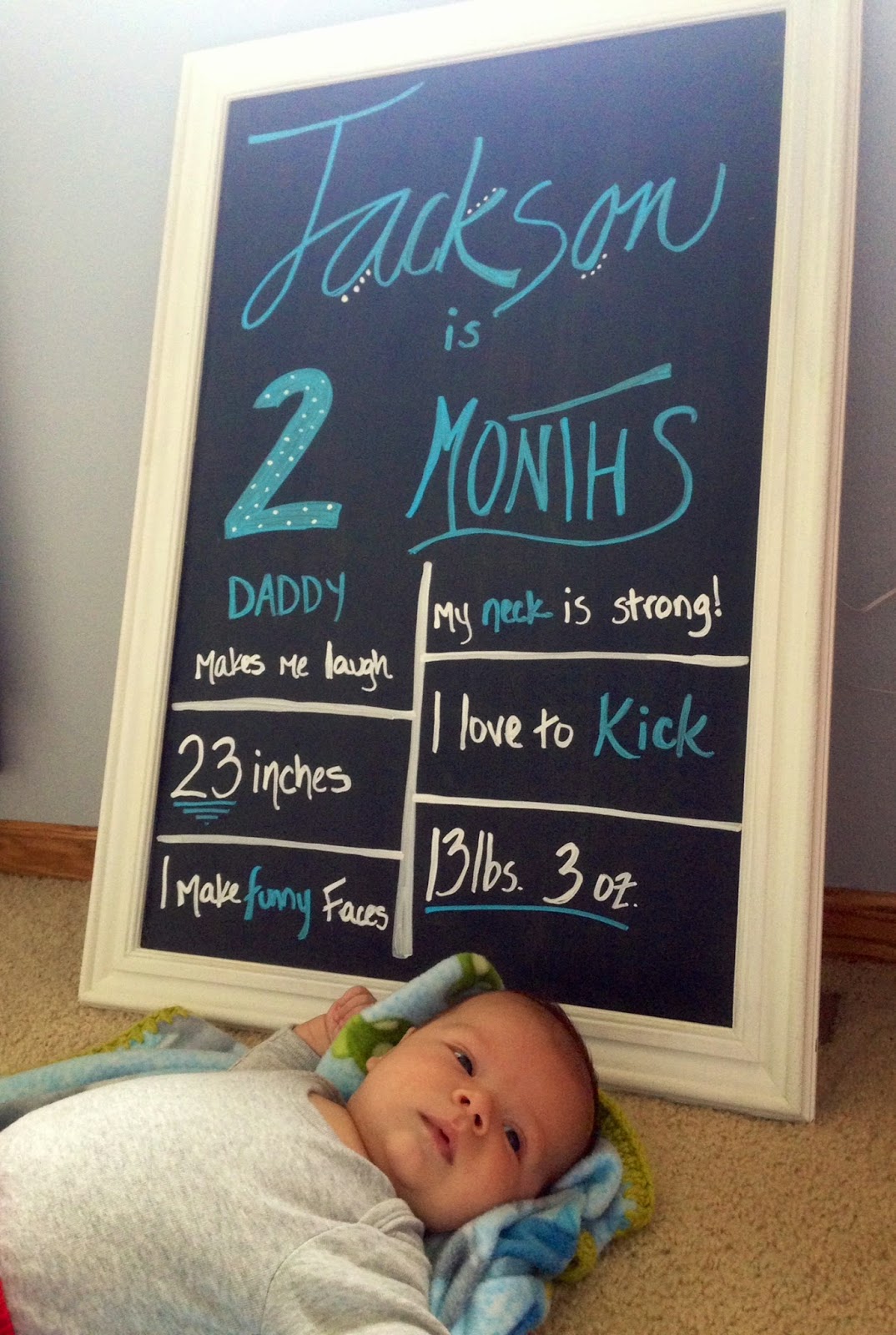 Weight: 13 pounds 3 ounces!! He went from the 10th percentile to the 90th for weight, the doctor said he has never seen a baby jump that much on the chart. He suggested I sell my milk because whatever is in it makes babies grow like crazy. He also joked if little man keeps growing he might end up needing a diet. Apparently I’m a master provider and he is a master consumer 😉
Milestones: He has not rolled over yet, but we are getting close. He gets propped up and positioned to escape tummy time, but hasn’t made his move quite yet. He has a strong little neck though, which makes carrying him around much easier!
Sleep: My baby is amazing and excelling at some things (eating…) but sleep is not one of them. We have improved from a month ago, but at our best nights he is still up about 2 times. I guess his skill for eating outweighs his sleep skills, he isn’t willing to give up his middle of the night meals quite yet!
On a positive note, he is pretty good at sleeping in his crib, he will even fall asleep on his own if he is laid down while still awake. Now if only he was so content when he wakes up in his crib.
Best Moment: seeing him recognize us and react. We went on a walk the other day and he was dozing off and I wanted to keep him awake so I called out his name, and those little eyes popped open and he gave me the hammest little smile. We talked and smiled the rest of the walk home.
He also loves to sit in his swing and just STARE at daddy and laugh. I’m not sure what he finds so funny, but watching those two bond will melt any heart, he already thinks his dad is the coolest!
Worst Moment: 3 words: two month shots. Poor little buddy just cried and cried, which was especially heartbreaking because he very rarely cries.
I also decided to take apart his bassinet to put in storage and I bumped a button that played the lullaby music and had flashbacks to when we first brought him home..Wahhh my baby is growing so fast!
Health: obviously growing isn’t an issue! As of his checkup Friday everything looks great. There nothing better than the doctor holding up your little chunk and telling him what a ‘healthy boy’ he is.
Eating: his all time favorite activity! Sometimes he stops eating for a second to give me a huge grin, I like to think that is his way of thanking me to waking up with him all night, every night. I accept his peace offering.
Teeth: None. He does drool quite a bit, but if we can delay teething as long as possible, I won’t complain! 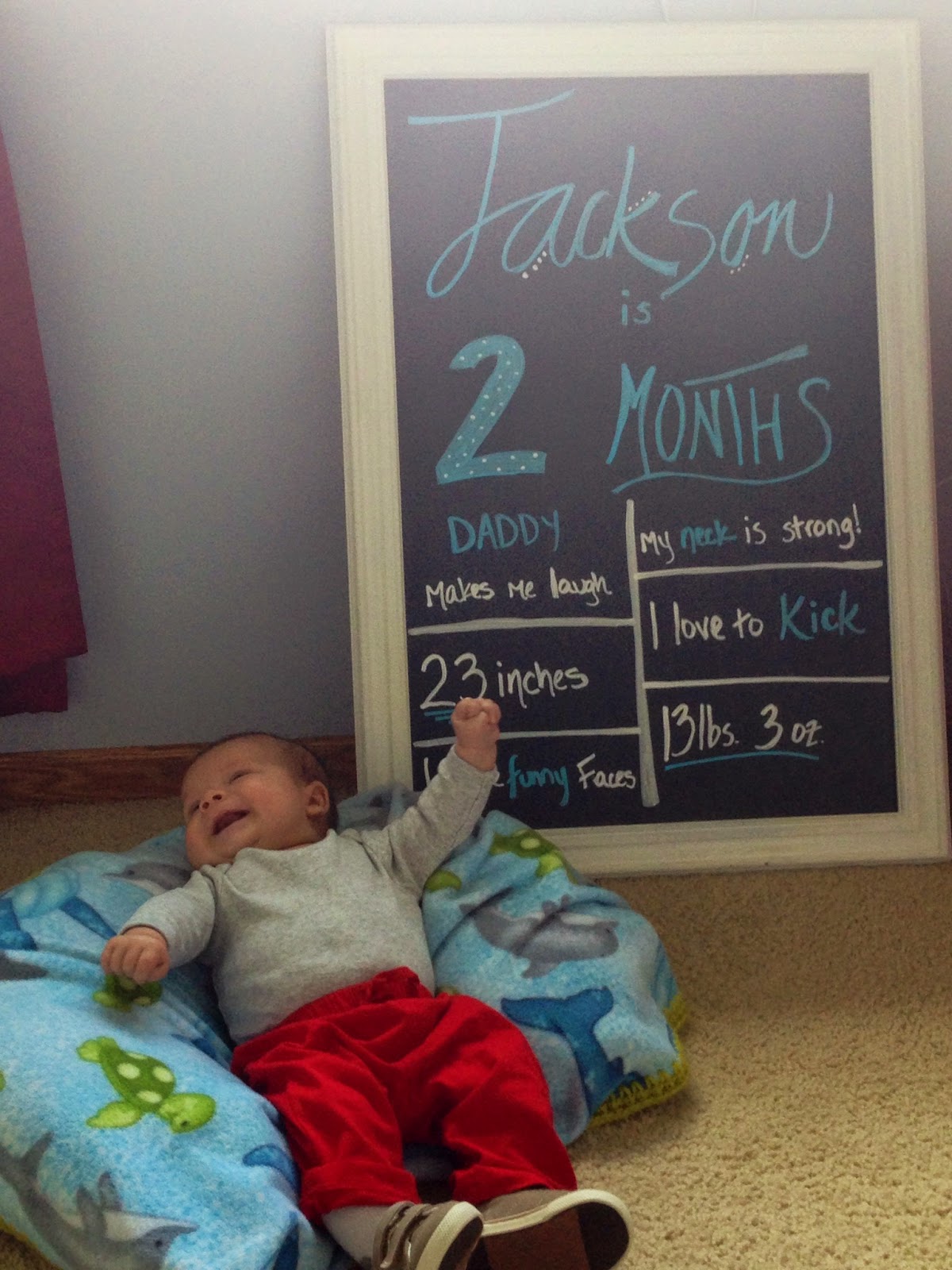 Overall, things are going great and we couldn’t have been blessed with a more perfect little guy. It is so funny how despite any planning, hopes, or expectations, the baby you have is so perfect and you really wouldn’t change one hair on their head. I cannot wait to see what milestones we hit in the next month, here’s to hoping sleeping through the night is one of them!