Not sure when this happened. It has already been a month since our little man made his grand arrival. It seems like forever ago, and it also seems like two seconds ago. Last Friday was his official ‘due date’, so we spent that day comparing how he is to what we think he would have been had he been born that day. He is packing on the pounds/ounces, and is becoming so alert. He loves to just stare, and give shifty sideways glances. Mom and dad are both serious people, so it only makes sense that he has already mastered his grumpy face. He does slip us a real smile every now and then. He reflex smiles all the time, usually accompanied by his little joker laugh. I’m not sure what’s so funny, but his ‘laugh’ is adorable and he can do it any time he wants. 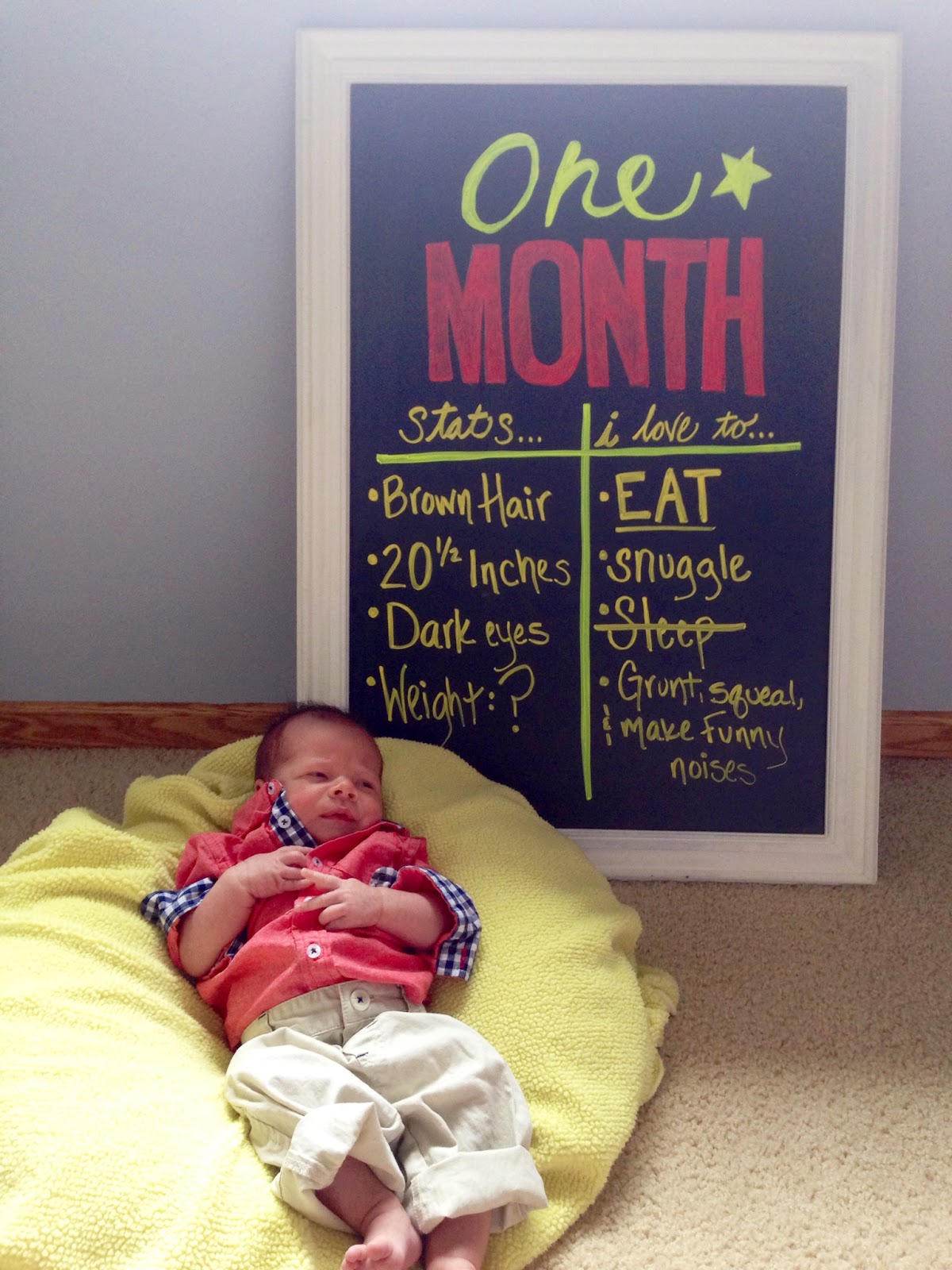 Age: one month
Height: 20.5 inches at his 2 week appointment, he has definitely grown since then, as is proven by his newborn sleepers being too small 🙁

Weight: 7 pounds 6 ounces at the two week appointment. Not sure exactly where he is at now but he is definitely filling out, I am dying to find out his official number, we have to wait until his 2 month appointment for updates but we are for sure in the 8 pound, if not 9 pound range!
Milestones: He has started to hold his head up! This is usually just for short periods of time, but still exciting. It makes lifting him up/passing him off to Mike much easier and a little less nerve wracking. He is a strong little guy! He has also slipped us a few smiles that started around 3 weeks. They are pretty far and few between, but when he shoots you a big, toothless grin, there is no denying it!
Sleep: Sleep is not yet our friend. On the good nights he wakes up 3 times…I have figured out I need to go to bed myself by about 9pm, and at least that way I get a little extra shut eye before we begin our all night party. Everyone says ‘nap when they nap’, but if we are being honest, nap time usually means do laundry/clean the living room/cook dinner/sit on the couch by myself and enjoy the silence. I nap best when the little man is snuggled up on my chest, which might be part of the reason why he doesn’t seem particularly impressed by being alone in his bassinet..
Best Moment: Those smiles! After a particularly sleepless night (which is every night, lately) I went downstairs to make some coffee, and the sunrise was really pretty so I went over to the window to let the little guy have a look. I was chatting away and explaining the sunrise to him (I’m sure he understands) and I looked down and got the BIGGEST string of smiles. It made every sleepless night worth it a million times over.
Worst Moment: I may have been changing a diaper at 3am, and he may have decided to go #2 mid change, and it may have projectiled so far that it hit the wall..
Health: He is doing fantastic. For being early, he had zero complications, no jaundice, no issues gaining weight, etc. He is just a little champ!
Eating: This is his favorite pastime. Sometimes, he seems to forget that he is eating and will start to cry, only to realize two seconds later the food is literally in his mouth at which point he quickly stops the crying and resumes the eating. He always keeps us entertained.
Teeth: No! Let’s hope those hold off until he is on a bottle the majority of the time..

We love our champ more and more every day, and we can’t wait to see how he changes in the next month!