Posted on August 2, 2014
HAPPY BABY MONTH!!
We are officially into August, I never thought this day would get here. Of course, I am mentally prepared for baby Stang to delay his arrival to be a September baby. That would mean three family birthdays, all in the same month. It would also mean missing the cutoff for school, meaning it would eliminate the need for us to even debate the issue. So, whether he comes early, late, or on time, I am fine with at this point (ask me again in a week or two though, I will probably change my mind!)
We have been so busy lately, with Mike working crazy hours these past few weeks, finishing up baby’s room, and trying to declutter the basement so we can FINALLY get it finished. The positive is that it is making time go by REALLY fast. As much as I want these last few weeks to fly by, I also look at the calendar more often than not and have a mini panic attack because we have SO MUCH left to do! 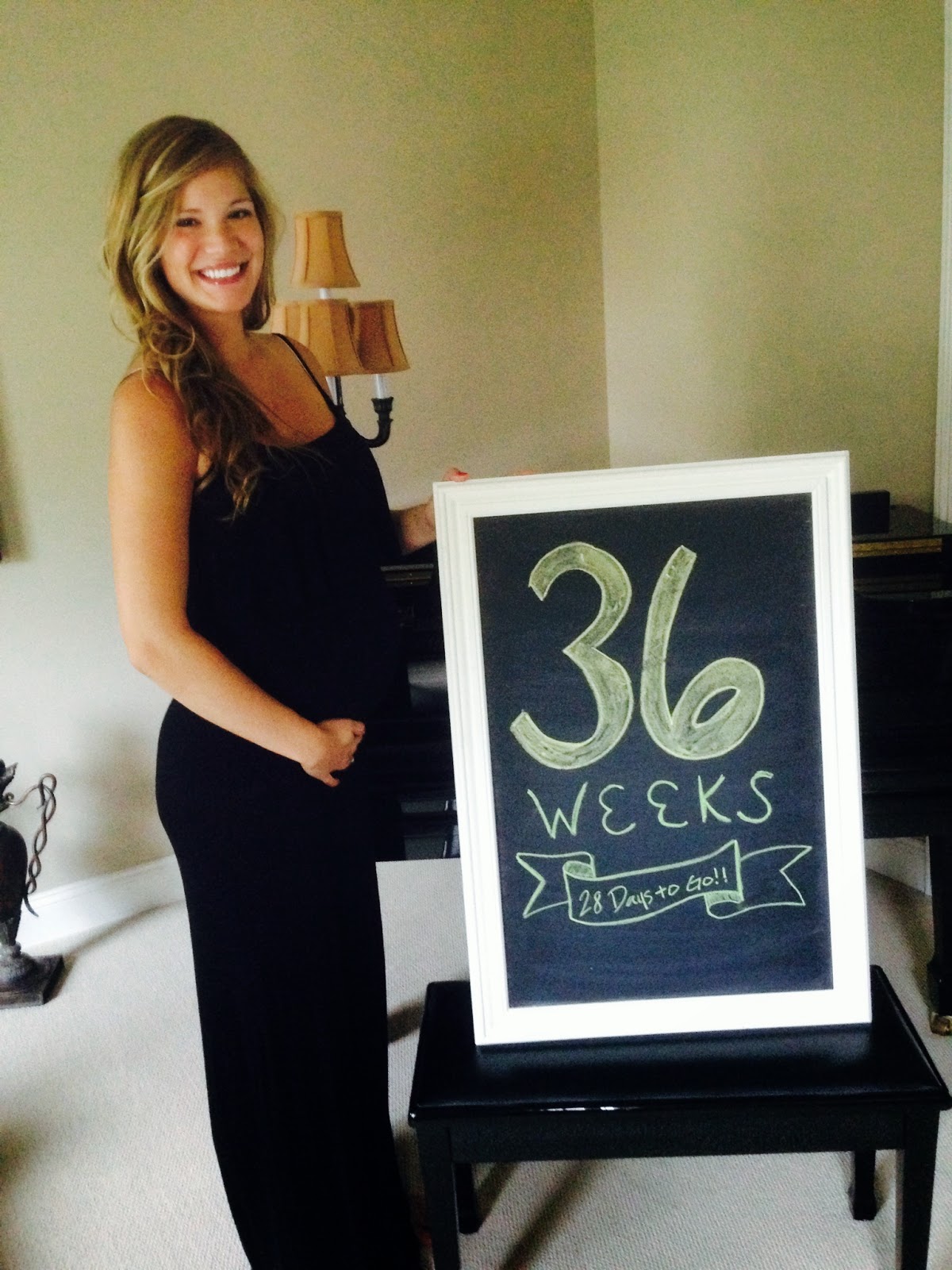 How far along? 36 weeks 1 day
Gender: a little man!
Total weight gain: 26 pounds. Right on track, but still..at this point though, half a pound a week is going to baby and his chubby cheeks!
Maternity clothes? I have a few items. My Jessica Simpson jean shorts are heaven sent, I wear them and feel like I am still wearing ‘cute’ shorts, and not the typical ‘mom pants’ that maternity shorts tend to look like. I also have a few t-shirt dresses from old navy that are great. Otherwise, maxi skirts, maxi dresses, all day every day.
Stretch marks? I don’t even like to say..I’m convinced the moment I say anything those suckers are going to magically appear! I do sugar scrub (Bath and Body Works aromatherapy scrubs are to die for) and use a baby belly bar multiple times a day. If those lovely marks make their appearance, it won’t be due to negligence on my part!
Belly button in or out: still in, but according to Mike last night it is ‘just barely hanging on’. I am up in the air whether it will pop before this is all said and done.
Sleep: HAHAHAHA. I go to bed pretty early thanks to waking up at 5am for work, which means as of late I have been up around 11pm, 1am, and3am, at which point I usually play around on my phone and doze in and out of consciousness before I wake up half an hour before my alarm around4:30am. The other day I was taking a nap and Mike said ‘you might not sleep well if you take a nap right now’. At this point, I will take any sleep, at any time I can get it.
Exercise: Still running, I am usually able to get in my normal 30 minutes 3-4 times per week. Surprisingly, I feel the absolute best when I am running, the achiness and being uncomfortable kind of just goes away and it helps me loosen up my tight muscles, especially because I get in a nice long stretch in after. We will see how much longer I go, I am definitely listening to my body, starting off by telling myself to just do a mile and assess how I feel, and going from there.
Best moment this week: Having an ultrasound Wednesday and seeing getting to see little man in 3D! it is so much fun looking through the different pictures and trying to decide whose nose, eyes, etc. he has.
Miss Anything? My wardrobe. As much as I have loved wearing maxi dresses every day for four months straight, I cannot wait to put on a pair of skinnies and a cute top. I have also reached the point of practically drooling whenever I see someone with a Mike’s Hard Lemonade or an Angry Orchard, I may insist a 6 pack of angry orchards be placed in the refrigerator waiting for me the day I get home from the hospital.
Movement: He is a squirmy little guy, but his kicks and punches have been traded in for big, less frequent rolls, and the occasional temper tantrum in which he decides to make my entire belly shake.
Food cravings: Cereal. Not the healthy stuff, which I usually eat. I’m talking lucky charms, cinnamon toast crunch, fruity pebbles..I also decided I needed a DQ blizzard last night, and told Mike repeatedly afterwards how it was the most brilliant idea I have ever had. Nothing beats cookie dough and fudge!
Symptoms: Just in the past week, I have had a little bit of lower back pain, but nothing too intense. And surprisingly, considering the fact that I essentially no longer sleep, I have had plenty of energy and have been cleaning/organizing/finalizing things every day. Is this the ‘nesting’ everyone talks about?
Anything making you queasy or sick: Nope! Been feeling great since about 15 weeks, let’s hope it stays that way through the end!
Labor Signs: None yet!
Wedding rings on or off? On, puffiness keep staying away please.
Happy or Moody most of the time: This week, definitely moody. It doesn’t take much to set me off, and just about everything annoys me.
Looking forward to: Having weekly doctor appointments. I had my 36 week appointment on Wednesday, and this whole pregnancy counting down to those appointments where I get to hear the heartbeat, see baby’s face on an ultrasound, and just being reminded that I am moving forward have really helped the pregnancy go by quickly! Telling yourself to make it to that next appointment is much easier than telling yourself to make it nine months!